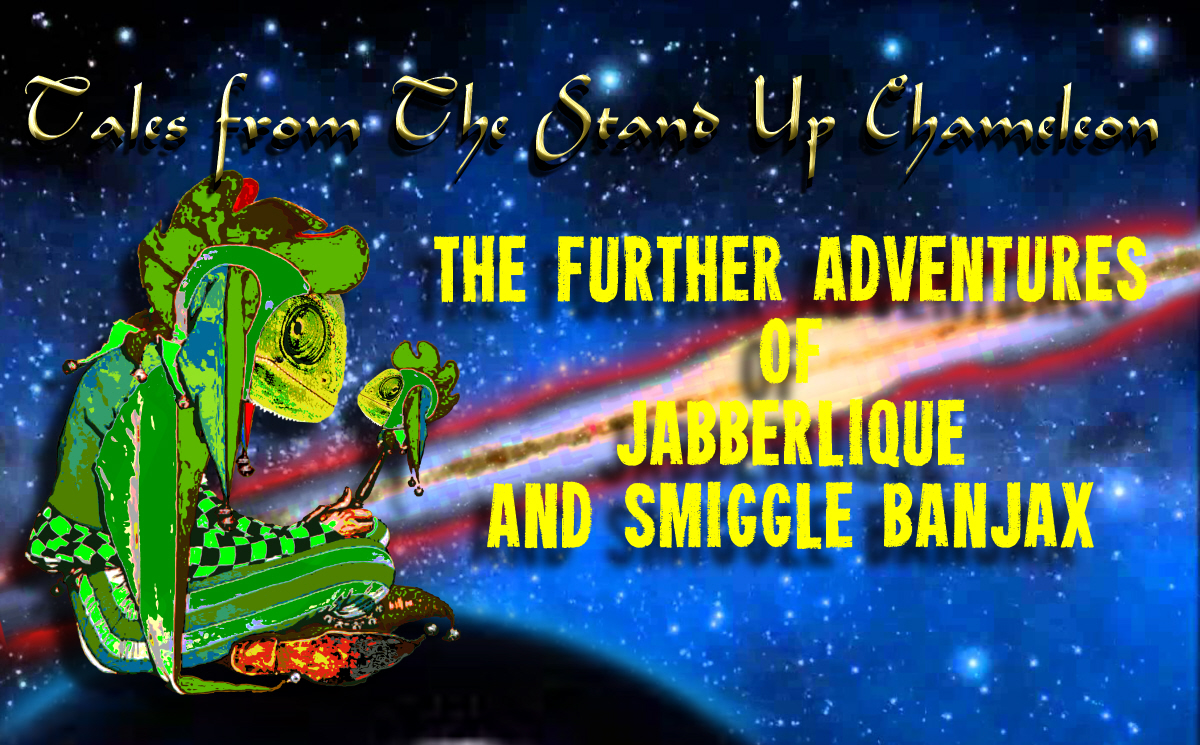 Everywhere is a nexus; everywhere leads somewhere else and back. Places are connected to others in greater or lesser degrees, so a city is a bigger nexus in comparison to a small town or village, more roads, rails, rivers lead into and from it so the city is bigger.

But some are deceptively small. One of these was as it happened also called Nexus, and it was also one of the most important. For it had not merely roads from neighbouring towns and villages, but a disproportionate number of roads, gates doorway and portals into other worlds and dimensions.

Its architecture reflected this as travellers from other realms liked the look of the place and stayed.

Someone born and raised in Nexus probably had the most cosmopolitan upbringing that anyone could and therefore had an especially open and friendly nature.

Smiggle Banjaxx was one of these and he was just about to take it off, He was meeting Jabberlique and that usually meant one needed a barrier or two.

“ About two should do it for now” Said Smiggle to himself as he threw the barriers onto the cart.

He was a small man, a greenish tint to his face and the pointed nose and ears gave the lie to his obvious Goblin extraction, but here all resemblance to those evil little buggers ended. By choice, he was most at home with either his stamps, or even better pottering in his shed with home brew. But needs must as the devil drives and his special talents made him a natural for the work he did.

For whatever he was he was none of those things, he was damn good at blowing his own trumpet and the especially open and friendly natives of Nexus swallowed it all hook line and sinker.

But Smiggle was his partner and the work  he and Jabberlique did together, was not pleasant.

This was the thought that ran through his head now as he pulled the cart up outside The Standup Chameleon, one of those bars where everyone knows your name. Everywhere has a place they can go like that, it’s the place where you find out the news. The Standup Chameleon was just that and more, it was the place in Nexus where you went to find out just about more news than you could shake a stick at, it was a nexus itself. Some of the strangers in that bar, well they were just that, stranger.

The locals were pretty damn weird too.

Walking through the door he saw all the usual crowd was there, all gathered around Jabberlique who was holding court in his usual fashion. Regaling them with tales of his adventures. Which in the main were complete fabrications, it was not his that actual life was any less eventful. Far from it, it was just whenever Jabberlique told the truth, about anything! Nobody believed him. So this was the enigma of Jabberlique, Life was far more efficient when he told the more outrageous version.

The work done by Jabberlique and Smiggle Banjaxx was important, and dangerous although this was mainly because Jabberlique was so blindly stupid.

The tall man looked up from his audience and waved.

“Smiggle my good fellow! Haste ye over and sit ye down!”

“Why do you always look so bloody good, last night would have killed most people?”

“You know as well as I Banjaxx old boy. I tell them I look fantastic and they believe me”

“Yes.” Said Smiggle, “But your talent doesn’t work on me, I know when you’re telling the truth.”

“Bollocks” Said The Guy With Bees On His Face.

“You a drinker! Don’t talk wet”

This from a man who; by the white clothes, and his general floury dustiness, declared him to be Nexus’ baker.

“Aye!” Said the Guy With Bees On His Face, “Tampon here.” He pointed at the floury man. “Tampon here, may bake the most evil pies in the multiverse, but he knows when you, Jabberlique, are talking bollocks!”

“Honest Smiggle!” Then to the crowd,

“I can, I can drink anybody under the table.”

“Aye!” said The Baker, “If whoever it is under the table first!”

This brought howls of laughter from the attendant throng.

“I’m not challenging anybody, but I’ll pay anyone’s bar tab who has a go!”

“Oh no you bloody won’t!” Said the Baker, whose name was Tampon Gaffoon, and was by now halfway to the bar.

“Joyce! Set up the booze! Whatever you’ve got and keep it coming!” He slapped a handful of notes on the bar.

“Tampon Gaffoon is going to teach Jabberlique a hard lesson.”

So it was that Smiggle never found out what Jabberlique wanted to see him for, as the night rapidly descended into an alcoholic haze.

But what was it exactly they did. Well it’s not easy to say. They, fixed things. That was it really. The thing was that the multi-verse was complicated. You had an infinity of dimensions co-existing in the same place. Sometimes they rubbed against each other and cracks appeared. These weren’t too dangerous in themselves. Smiggle and Jabberlique never handled the big ones, that was down to the heavy mob. But the little ones were hard enough, as bit of not necessarily compatible matter could leak through.  Jabberlique and Smiggle Banjaxx fixed the cracks, plugged the leaks. They removed the things that slipped through.

It would not be until the next morning that Tampon Gaffoon would find out that had paid for all the alcohol consumed that the night in The Standup Chameleon, including the emergency supplies Joyce had to send out for. Tampon had slumped unconscious to the floor in a cloud of whole-wheat particles before the hour had passed.

“Serves him right.” Said The Guy With Bees On His Face,

“He does bake the most evil pies in the entire Multiverse.

“The nineteenth dear boy. Why?”

Joyce who like all Landladies was a woman of ample bosom, but this in no way hampered her speed.  She fairly bounded up the stairs to the bathroom and slammed the taps on as if she was in training for the Olympics.

Chaos has many forms, violent and terrible. No man can undo what chaos has wrought; though, he looks upon damnation and hellfire in the wasteland that is left in the aftermath of annihilation! AND LO! MAY HE WEEP…

At that point, the regulars of the bar began to move in what seemed a well-practised routine. Smiggle and The Guy With Bees On His Face clearing away all tables plus their chairs and stools, Lonesome Henry The Human Bomb removed all sleeping dogs and their stools. Jabberlique having to stand in for Tampon Gaffoon who unconscious could not take part in this ballet of space clearing. So, it was Jabberlique that raised the bar counter flap, and hooked securely in place. It was Jabberlique who jammed the wedge firmly under the door that connected the bar to the private house beyond. Knowing, that Joyce would be securing the bathroom door upstairs in like manner.  Lump Lumphammer, quickly took up his position by the door, his golden hair streaming from beneath his winged helmet. Folded his massive fur clad arms and smiled.

“You betcha ass brother Lump!” Smiggle waved to the blonde giants’ twin, who stood at the front door. His greasy overalls reeking of diesel and tar, he took off his baseball cap and stroked his baldhead.

“Anybody come to the front door s’gonna have to go through me!”

Actually, whatever it was that stopped anybody trying to get in, the huge builders’ bum that Jack Hammer stuck out streetwards must surely take the lions share of the credit.

All this and more happened in an instant, everybody in The Standup Chameleon a blur of purposeful activity. Everybody except one, a small man sitting in the snug by the fire. Any stranger would have soon noticed that all the activity had focused on this point and radiated outwards. This man was somehow the key.

This mans name was Merkyn Weaver, and it had long been thought that he was cursed, and it long been thought that his curse manifested itself whenever he got drunk. Normally this only happened at a party! But whenever it happened, whenever Merkyn Weaver drank himself into a stupor… (well, it happened even if he got just a little tipsy actually)… Merkyn would turn into a fish!  Scales Fins Gills and everything. So this led people to believe he was cursed.

There was definitely something, fishy about it.