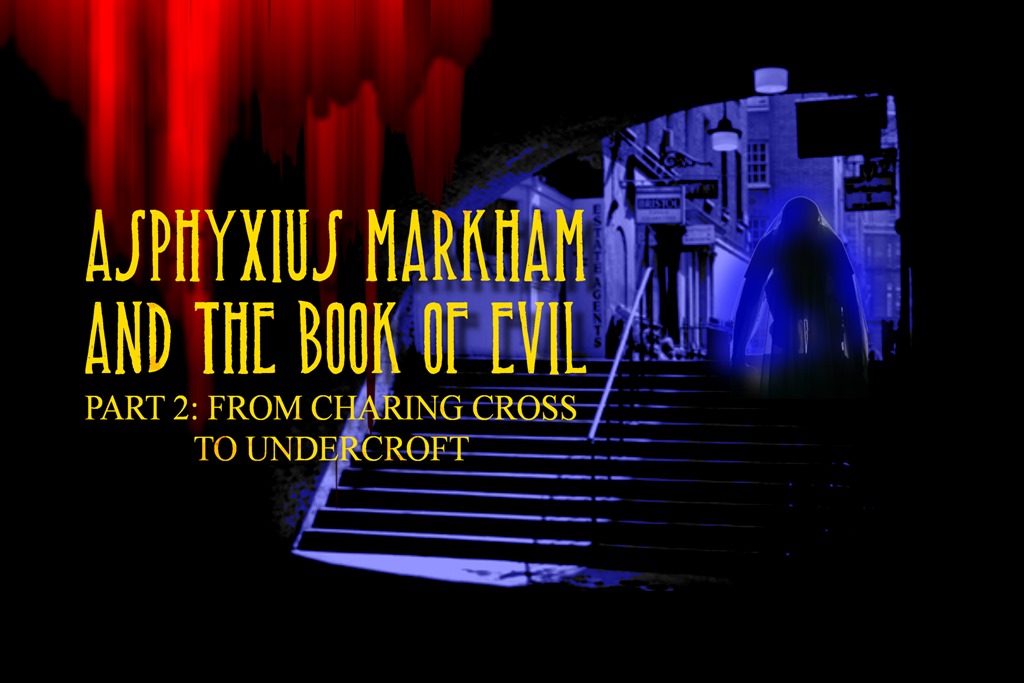 If you have not done so read Part 1: The Whitechapel Horror. First.

The sun was shining, though most of London didn’t notice as Asphyxius Markham and Dr Jonathon Wylie-Minogue walked down the Strand towards Charing Cross.

“…and the bodies were all found to have puncture marks on the neck and the symptoms of Curare poisoning?”

“Indeed Markham, When we’d properly cleaned them up we also found that they didn’t just have terrible haircuts, they had all been partially scalped too, hair skin and all. So we now know the full horror of the crimes, but we still don’t know how his victims were spirited away.”

On the concourse in front of Charing Cross station street venders and tradesmen of all kinds hammered the air with cries of loud proclooning and hefty belts of pride.

“Come Minogue let’s set awhile and have our begloomed footwear tarted and preened by this steamy lad”, said Markham climbing into the chair and gesturing for Minogue to sit beside him.

“That’s right Sirs!” said the shoeshine chap. “Make yourselves at ‘ome and allow me to amaze you in a most sing gu lar manner.” His accent was that of the East End but he affected a higher breeding than that which had befallen him in his youth. “This” Indicating the chair, “Is the marvel of the modern age, powered by that saviour of civilised man. Steam. Note how at the rear is a small boiler unit which in turn pumps steam into the pipes that turn the wheels and spin rarnd these here circular brushes.”

Minogue began to be entranced by this wonderful chair and the strangely hypnotic quality of this chirpy Cockneys gollyoinkering voice.

“Note also how from these fine brass nozzles short bursts of steam blast onto the pans of polish, with the fury of a Brigadier finding The Kaiser a sitting in his own water closet, thus vaporising it and projecting a fine spray of waxy steam at the shoe. ‘Tis the modern ‘Spit and Polish’ Sirs, effective yet hygienic, then the brushes move about your feet faster than a mouse chasing his ladymouse when he has the urge to be a daddy mouse.

As the brushes whirred and hummed around Minogues feet a gleam came to Markhams eye.

“I note sir, that this ‘chair’ in which we sit has wheels.”

“Indeed sir” said the lackey “For all traders and street floggers hereabouts must clear away no later than seven of the clock, or we face a hefty fine. So  with a short turn o’the ‘andle and the steam is transferred to an engine which powers the wheels to expedite a swift removal from the borough.”

“…See! See how bright and glossy they are, how the sun that manages to scheme it’s way through the clouds flares in the wax! Note sir, your reflection and the entire panorama of the street are displayed upon the upper, though your face is somewhat comically altered by the curve of you toecap.”

He began resetting it to attend to Markhams shoes.

“What’s you name my good man?” Asked Markham “I like to see a man excited by his work and you have to me the mark of sharp wits, I see also that you spent the first few years of your life in a hovel on Cheapside, when you were seven you and your Mother moved to an apartment above an inn on the corner of the Fleet your Father having died of chronic quinsy the year before…

…I could go on but it would waste valuable time.”

This prompted the entrepreneur  to exclaim…

“…STOP! Say no more, I confess I was startled and not but a small amount frightened by your exposition sir, but no more for you are Asphyxius Markham. In truth I care not about how you defined the very truth of my life for the fact that you have analysed me shall buy me many a glass of ale in years to come and I can tell my grandchildren when I’m toothless of how I met a great man.”

Markham dismissed this with a wave of his hand.

“My name Mr Markham sir, and indeed you Doctor Minogue is Alan Sugar, though I have set my sights on advancement in the world of business and fear such a name may be somewhat detrimental to my trade, as the world of confectionary does not sit within my projects. So I am to change my name to Coal.”

The Steam Shoe Shine swifted it’s work upon Markhams feet as he then asked, “Tell me, do any other traders use mobile chairs such as these?”

“Why yes, and I am the one to know who, for I have bought six of these chairs and know who has them and what they fitted for, as I rent them out at a fee. I have three as you can see, Gravy Barnett over there has one.” He pointed to the Emergency Dentist “Siggy Frood another from which he dispenses mobile Sy ko anally cysts whatever they are and the last is taken by Clarence Edwards – Todd, a barber. Both of them will be about here at Noon for that is there usual time.”

“This barber fellow.” Said Markham, “What manner of man is he?”

“Well, I don’t know if it would be right of me to say sir, but well sir, he strikes me as a bit of an odd sort. I hear him as it seems to be singing in a low voice but the words he sings if words they are, well they are foreign sounding sir. Quite makes my testacular partments stampede for cover. Then he’ll cry out at odd time ‘The Book, The Book it must be bound!’” most odd, but it’s an odd world right now. I hear tell of Sea Squirrels coming ashore in the docks, what could make them leave their watery dreys in the Sargasso Sea for dry land.

“Sea Squirrels!” said Minogue, “How do they keep their nuts dry?”

“They swim on their back.” Said Markham and Sugar in unison.

The shine finished Markham rose and went for his wallet…

“As you wish, but I feel that you will soon receive a greater sum as reward for the service you have done London and possibly England this day.

“Now Minogue, we have things to attend to and as luck would have it here are Constables Lampling and Bruntle.” He waved the Officers over.

“Why Mr Markham, how may we assist you Sir?”

“We must keep watch for a barber with a chair on wheels, and apprehend him as soon as possible so one of you must make haste to Scotland and inform Inspector Stride.”

“Easily done” said Bruntle, “ Since we last met I have kept about my person some Pocket Pigeons for just such a task.” and pulled from his jacket a tiny bird. “I simply dot this ‘ere red dye twice on its back, this grey pattern on its breast make it known that this bird is named “Euradora” and they yard knows Euradora is with me, and I am assigned to patrol Charing Cross and Trafalgar Square. Two red dots mean trouble Charing Cross, one would be the square. With this code and system we can cover the whole city.”

With that he flung the tiny bird into the air and flashed into flight wheeled around flew up speeding towards Whitehall and Victoria Embankment.

“They make such difference to full sized pigeons where you have to keep them in a roost or carry a huge basket around. Very impractical.”

At that moment a whirring and sputterating sound caught their attention and they turned to see a steam chair swiftly arriving and moving to a clear spot. It had a striped pole above the seat and side panniers, from which the man steering it began to unload trays and brushes, scissors and,,,

“We must move quickly men,” Said Markham, “Constables, when Minogue and I engage him, you calmly approach from the rear, make no sound. When you hear me cry ‘seize him’ do just that and quickly cuff him. Now come Minogue as we approach keep your eyes peeled for a hypodermic needle,  for there will be one in those panniers. It will be deadly, loaded with Curare.”

Markham briskly walked across to where Clarence Edwards – Todd was readying himself for trade and was almost surprised when Markham seemed to appear from nowhere in his Chair. Quite oblivious to Lampling and Bruntle moving round behind him, Minogue blocking his escape from the side.

“Mr Barber, I would know of book binding.”

Clarence Edwards – Todd, gave one gasp of anger and a look of cold evil hatred cast across his face, then in flash went, not for the needle concealed in the leather bags but for his razor and even as Markham screamed “SEIZE HIM” drew the blade across his own throat opening veins and began rapidly pouring life from him with the torrent of blood.

“…The book is bound, and will soon be open.” Then laughed causing blood to splay everywhere saying, “Just a little bit off the top Sir?”  and died with an evil smile across his face.

As he lay there Minogue looked at the corpse and to Markham.

“Well that’s that then and saved the Crown a shilling or two into the bargain, it’s over. Quickly too, thank God”

“Oh no my dear friend, It’s only just begun. Indeed this has become much greater and as I feared the very realm is in danger.” He looked about him at London laid out before him watching it’s people, listening to the sound they made as they went about the simple lives and above even that clamorous hubbub in the distance he could hear a choir in St Martin in the Fields singing of hope and the greater love that surpasses all, and he shivered as not one of them suspected what horrors may about to be unleashed.

“No Minogue, it’s only just begun, think on what he said “The book is bound and will be soon be open, Sea Squirrels coming ashore too. That’s important too, but I know not why. We need advice, advice that only one person can give. We must pay a visit to my brother Undercroft.”