I was intending this blog to be just another teaser about

(though it still will be that and more) but I can’t let last Saturday (October 1st) go by without writing some thing here.

Sadly it saw the very last DRYSTONE SESSIONS at The Spinners Arms. The sessions started about eighteen months ago and for a time were run in tandem with WIZARDMARRAS SATURDAY NIGHT AT THE SPINNERS Open Mic nights. The idea was to give a paid gig to some of the up and coming acts that were coming through the Open Mics which would also keep a weather eye out for  promising newcomers who could then get an unpaid support slot. 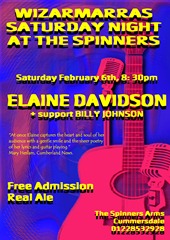 It all started well, with decent enough numbers turning up every month. Though perhaps we should have seen the pattern emerging with the Open Mics which by this time, six months or so into the Sessions had died out completely. Barely a punter in sight and once or twice no performers.

So to see the delightful KATUS performing to about six people (four of which were Alain and Alison (of The Spinners) Karen and myself. There were about six others, but they hadn’t come for the music, a fact made obvious by their conversation.

The hard thing being that no punters equals no takings and the pub ends up making a loss. Add to that the fact that as with most pubs business is bad (certainly worse than normal). 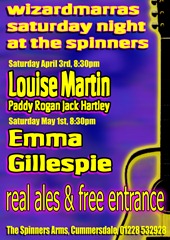 But KATUS gave a set that was actually so lovely in it’s intimacy, instead of pretending that the room was full of beaming faces she sang and spoke to the few of us without any hint of the arrogance that so called bigger stars would have succumbed to in the same situation.

But here’s the rub, the question that makes me want to snap at the Simon Cowells of this world. Actually I want to snap at Louis Walsh more, who I think has a much colder heart than Mr Cowell despite his outward toora loora loo “I t’ink yer just Great, sure yer livin’ der dree’am” before he chews them up and spits them out. If you want a clincher JEDWARD, Slap slap slap to the three of them and bloody hard with it.

Why this anger that I’ve surprised myself with, well it’s people like that who are if not responsible for the downfall of the Drystone Sessions they are partly responsible for our attitude as a nation to what we consider to be good and quality performance. 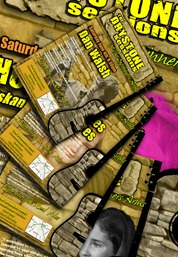 By that I mean the use of backing tracks by live acts. Karaoke basically, that somewhere along the line it became OK for a singer to perform without a real musical instrument anywhere in sight. The singer may be great, but without accompanying themselves or working alongside other musicians all they are is karaoke with knobs on. The sad thing the really sad thing is that these acts can fill a pub performing songs by other people and it seems to me that it’s at the expense of those who spend long hours working on a craft, writing their own songs and learning to play an instrument.

All that remains is to thank Alain and Alison for giving me an opportunity to present some of the areas best and brightest. For three years or more of fantastic Saturday nights over which they have become great friends and to thank all the people who have come along and given their all at the Open Mics and Drystone Sessions. Too numerous to name each one. Thank you.

THE FORTH BE WITH YOU

So on to happier and more exciting things, something features real live music with as many instruments as can be imagined. I speak of course of Nuts in May which from the above header you will see that it opens on 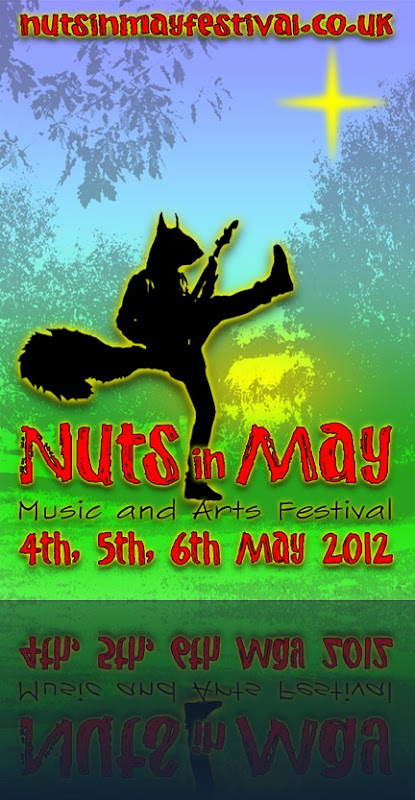 and runs from the 4th to the 6th with at least four stages The Jack In The Green Stage, Bar Stage (cool and groovy name to be decided upon) organized by the able hands of Dave and Jude Proud, a chilled out venue presided over by the eminent Dubbers, I don’t if he’ll be calling it it The Love Shack or John’s Snug but anyone who’s familiar with those venues at Solfest or Beatherder will know what to expect. There will be a magical woodland stage and session tent (you can probably guess who’ll be running this but as i haven’t confirmed it yet). I can’t give you any clue as yet to any acts but rest assured that I’m working it and already have some fantastic names lined up and I know that Dave has too. My next podcast will have some of them on it so you won’t have to wait long and we’ll be making the official announcements before long as tickets will be going on sale very very soon.

Who’s the chap on the poster?

That’s Squirrelkicker and you will be wanting a tee shirt.