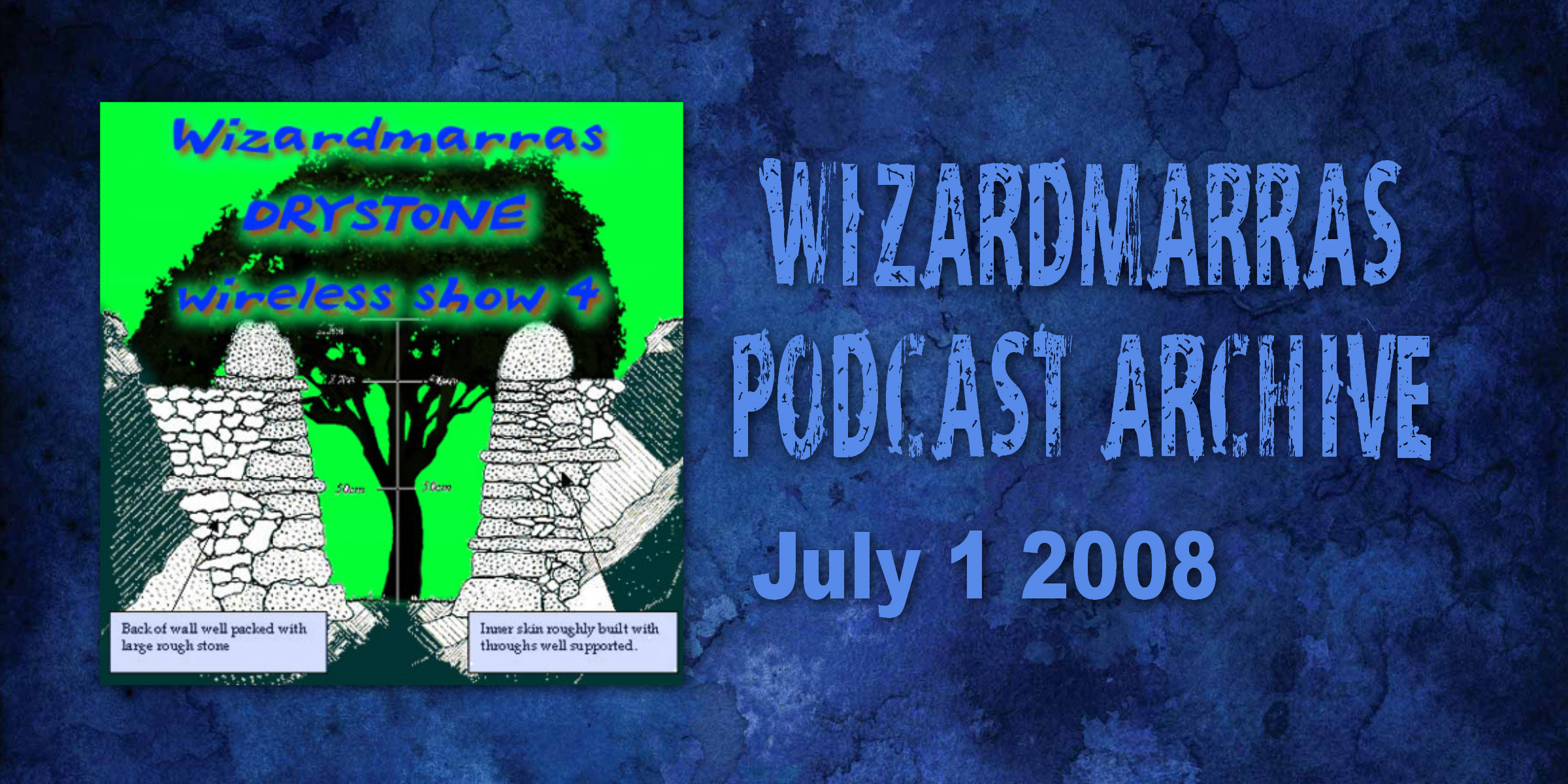 …and welcome to the blog of WIZARDMARRAS DRYSTONE WIRELESS SHOW numero 4 and before I say anything else this one is dedicated to my THIRD GRANDCHILD who made here way into the world on June 20th weighing 7lbs 12ozs her name is ELLIE GRACE ARROWSMITH and the most beautiful baby I have ever laid eyes upon.

As any right thinking person knows Klezmer is the white mans reggae and Minnie Moosika are one of our (for my money) prime exponents, they have the somewhat dubious honour of being the last act I booked this year for The Drystone Stage,I’ll also have the pleasure of introducing them on stage at Glasson Music Festival this weekend where I’m comparing, standing in for the usual MC Will Morgan who unfortunately is elsewhere. (listen out in the next WDWS for a track by Will)

THE MELODICA, MELODY AND ME – PIECE ME BACK TOGETHER

I featured these guys back in April on the first WDWS, and I just had to put another track up they are (as the describe themselves on their myspace) The Original Folksteppers. Which really is as good a description as any, though they really defy categorization. They are true originals, and it’s not just me who thinks they are brilliant. Rob Da Bank has recently played them on his Sunday night Radio1 show (and booked them to played BESTIVAL the week after SOLFEST) Steve Lamacq has played them on Radio 2 and Gary Crowley on BBC London. They are also interviewed on a rather excellent podcast

You’ll find the links on their myspace but it’s easy to miss stuff sometimes and I really recommend you to check out their myspace page as it has a couple of truly wonderful YOUTUBE vids that you simply must see. One is of the legendary Irish drinking band THE DUBLINERS demonstrating how to play instruments together! The other clip is of I know not who, to say it’s a group of semi naked men in a waterfall pool could give entirely the wrong impression. These guys are making fantastic music, mind blowingly breathtaking amazing music that you won’t believe. Watch it all.

Mikey Grant sent me the track by DUMB INSTRUMENT through my demo upload page on my website. This is music to make your flesh creep (in a good way) it’s the stories they tell that send a pleasurable thrill of unease through you. They are timely songs that make poignant comments about todays world with truth by the bucket load. Simply put they tell it like it is but underscored with beautiful tunes. This track has also been featured on Radio One making the late play list.
For those who don’t live in Scotland “Neds” are “Chavs” ( or insert your own name for troublesome youths).

FIONA CLAYTON – EVEN THOUGH

After that last track what’s needed is the sweet voice of a young Cumbrian girl who is another to add to the list of talented singer/songwriters emerging from the Eastern side of the County. She featured on mainstage last year at Solfest, and came to The Spinners last session and sounded so wonderful that I simply had to put her onto The Drystone this year. (next Spinners Open Mic, this Saturday 5th July)

Someone else who should really have been at Solfest last year but something went askew somewhere down the line and so she didn’t. However the matter has been addressed and she will be with us this year. Listen to the luxurious harmonica on this track, so tasty you could dip your bread in it. It’s closely followed by…

This track is for me one so synonymous with Solfest that it gives me extra special goosebumps every time I hear it. Emma and the Professor were another act who played on the Drystone Stage in it’s debut year and it’s special because of that. Emma Heath and The Professor (Mark Davies) have an on stage chemistry that spreads outwards off the stage in waves. Then you take Emmas soaring vocals and Marks super funky bodrahn playing (that really takes the instrument into new dimensions) and you have sheer unalloyed pleasure. Nowadays they are augmented by Jonathan Draper aka Jonny Cello on cello (surprise) and Kevin Willoughby on Bass and the mix is even better. Another act to see at Glasson Music Festival this coming weekend. Although I’ll miss them as I’ll be back I Carlisle on Saturday for the Spinners.

Rory Connor finished the Drystones contribution to last years Solfest and as I say on the podcast they were my favourite act of the weekend and not just because I’d finished my compering duties for the night and I could completely relax. No, they were just a damn good band making fine music. They are back this year, appearing on one night as The Rory Connor Band and then with a slightly different line up as TARRAS making a return to the stage after far too long an absence. In truth I should say that some members of Tarras are in the Rory Connor Band and Rory is a new member of the reformed Tarras, along with Ben from Digitalis and a few others. Confused you won’t be just enjoy the tunes, that’s what counts.

Jaca (Julie Armstrong) is a petite lady whose size belies the power of her voice, and what a fantastic voice it is too. At last years Solfest she was attending as a journalist standing in front of the stage wishing she was on it, she told me this in the letter accompanying her demo and when I put it on, well there was no question about it. She had a gig at the next one. She calls to mind Tori Amos, Regina Spector, and yes there’s Joni Mitchell there too. Check out the article in the Cumberland News.

and there’s a nice video too

This is an exclusive recording and mix of Wills new song “Officer” and there are one or two swear words in it and it deals with subjects that some may find offensive. But it IS a comedy song and if anyone should be upset by it then I hear and now apologize. But it is a joke and an extremely well written one at that. It had the audience in stitches at the Spinners when he premièred it and it is for his many fans that I take pleasure in including it here.

A bit of nonsense from me from some while ago, as a welcome to the world and hello to Ellie.

Next one hopefully a bit sooner. We’re less than two months away from Solfest now so I’m hoping to put a couple of these out a month until then. There are still tickets available if you want to come along and enjoy the bestest ever festival there is.