FROM A VERY UNTIDY DESK

So if you’ve hit on this page following the link from the Solfest message board here’s the crack.

In some ways I’ve become jaded with Mainstage. Even though believe me standing up there in front of you wonderful people is the biggest buzz in the world (and sometimes the scariest) it is run in such a way…

…and here I pause to commend to you the brilliant and lovely Sam Jelfs who is the finest stage manager that Solfest could wish for, not forgetting Gerard works harder than he should for a volunteer, year long putting together a terrific line up year on year and depending on who is available within the budget he’s given. Sometimes it’s a harder job than it should be. Finally Anna, who came to us a student studying Festival and Event management and who has now become an indispensible part of Gerards team and the Solfest family and this year has just graduated with first. I spoke to her at the weekend at Stainsby festival and she puts a lot of her success down to Solfest and in particular to Gerard and Simon too for being interviewed for her dissertation.

It is run professionally and efficiently because that’s how the big guys like it, and that’s how it has to be. But it becomes impersonal; the high rolling bands haven’t the time or the inclination to get to know on a personal basis every MC at every gig they play. That’s what MySpace is for.

But I need the craic, and every year I book bands and acts for The Drystone and only get to see a third of them. 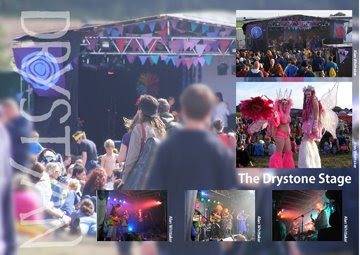 I book the acts that make the music I hear, who are bright young things who will one day grace stages far bigger than The Drystone or even Mainstage and in locations far more exotic than the wind blasted fields of West Cumbria. I book them and care about them. And every bloody year I miss some of the most fantastic sets the festival gives us all.

I don’t get to speak to the people I’ve built up a relationship with through emails and contracts. I’d like to meet them and talk to them.

There’s the other really exiting thing too, the thing that I enjoyed more than anything last year. Using the radio mic to compere from the audience and to actually talk to people, have them introduce a band or shout for more. I can’t wait to do that again, to bring you into the show. This year all being well sees a little refinement too, you’ll have wait and see what that is.

For bands, well we of course have the brilliant Adrian Edmondson and The Bad Shepherds. I’ve seen them play twice now at Workington and Dent Festival and both times they rocked. I think some people still think it’s a joke, that Adrian is doing another “Bad News” but he’s not it’s serious stuff this and I think in some ways it’s the best thing to happen to Folk Music since Fairport Convention got plugged in. Punk tunes on folk instruments in a folk style, it could oh so easily go down a very smelly pan. But if you surround yourself with some absolutely Stellar Folk Musicians like Fairports Maartin Allcock, the truly amazing Andy Dinan who can play a fucking fiddle let me tell you, and of course Workingtons own Troy Donockley who plays the Ukulele and Pipes like no other man. He also told a very funny story about a local character named “Tucker” and Border Crack and Deekabout doing story about a “loch Ness monster” type sighting in Maryport harbor which I can’t possibly repeat here as it’s worse than the swearie word above.

Songs like “Down In The Tube Station At Midnight” become tragic tales like Kate Rusby ballads of sorrow and loss, you can hear the poetry and dare I say it the literature of the song. Their version of “Teenage Kicks” a song described by John Peel as the best Pop record ever becomes the best Folk Song ever. Just listen to what Andy and Troy do on the instrumental break, spot what’s in there. It’s a piece of genius.

Someone who didn’t quite see what I saw said.

“Yes, they are good. But they’re just a covers band.”

But isn’t that what folk bands have been doing for years. Other people stuff, keeping it alive, keeping it relevant in a changing world.

More on the other bands to come soon.

Now I need to go bed, it’s 2:22 am. I turned fifty five yesterday. I had a bloody stressful year and I’m a knackered old fart.