Here I am sitting at home and at the keyboard a little earlier, Thursday hasn’t finished yet so I’ll write my account of Wednesday onsite now while it’s fresh and deal with Thursday when I’ve done the paperwork, for that is my lot until Saturday I fear.

An early start onsite meant no time for anything but a bath beforehand and the briefest of emails. Though an exciting call from Hilly ensured the day would be good one.

Tosh put the keys through our door when he’d set off work at “jeeeesus!”O’clock in the morning. So we just had to drive down and unlock, Karen stayed for a coffee and then off the research the tastes of a nation in Cockermouth. Cockermouth (or Knobagob as it’s sometimes called) Wordsworths boyhood home after his folks had moved from Penistone in Yorkshire, you’d think they would have noticed.

Settling in the first job is to move the Chess piece, I’d started the game on Sunday night with White Queens Knight Pawn advancing two squares forward, The following night Adam (who is a sneaky and calculating chess playing vampyr!) returns with Blacks opening of a simple (perhaps too simple) Black Queens Bishop Pawn forward one square. Now here an interesting new ingredient is added to the mix, for the night before last Tosh is the occupant of the van. Will he join in the game and create the butterflies’ wing whose flicker decimates an entire continent.
YES!
Brilliantly by accident or design, he has placed WHITE QUEENS ROOK PAWN ONE SQUARE FORWARD. I nearly shout out in joy, and I will have to think about my move, for now I am Black.

There was supposed to be a freight container being delivered at one thirty, it never came. But I actually did some essential pottering part of this involved walking over to a far field offsite where the stone for the Drystone stage comes from so I went over to have a look at how much there was and so on. I knew full well exactly how much there was and everything, exactly what was left when we’d finished last year but I wanted to stretch my legs. I found one or two interesting bits and pieces too that might be useful.

Later I started to plot out the stone circle. Great view of the site from here and it’s evident that the fence has gone up fast; it’s almost round the main arena.

Then the main event and upshot of the call from Hilly.

THE ARRIVAL OF THE WICKER QUEENS
These beautiful ladies arrived onsite after travelling locked in a passionate clench on the top of Hillys bus all the way from Downsouthshire. They have travelled from The Glade and Green Gatherings and their home is now Solfest.

It’s an interesting point. Some might say that Solfest having artworks that have already been seen at other festivals is not good. But why should a beautiful object only have a shelf life of three days, or six, or nine. It would suggest a gross shallowness in the aesthetics of the festivalgoer. Degas’ “Little Dancer” has been on view from decades and is still for me the most delightful piece of art ever made. The Willendorf Venus is circa Donkeysyears and longagotime, and is still redolent. So too are our two ladies. Created by Michelle Cain, I think they are gorgeous and just about as sexy as wicker gets!

They are laid safely on one side until when such time and where such place is decided they go, and I return to the task of labelling, a few radio greats ARTHUR ASKEY and JIMMY CLITHEROE, A Brace of Pythons (who are actually part of the bracing come to think of it!) LAUREL & HARDY and right underneath the stage GRIMALDI.

Then it’s more pottering and reading until Karen arrives around 9.30. We spend the evening playing noughts and crosses and hangman.
The word was WIZARD you would thought that would have been easy enough but I was not only (being kind) able to draw the gallows with la’al steps up but also a hangman and priest as well as the fellow dangling before Karen got it.

THEN she did the same to me with WISEAPPLE, but see it should two words that’s what threw me not thati’mgettingflustered about it.

Even when I thought I caught her out with ALKETHENE, she bested me, curses! I am laid low by a woman…

Twas a sweet and peaceful night though, with a just turned moon above us. 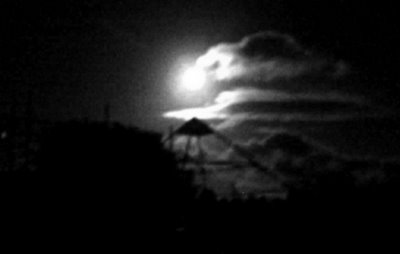