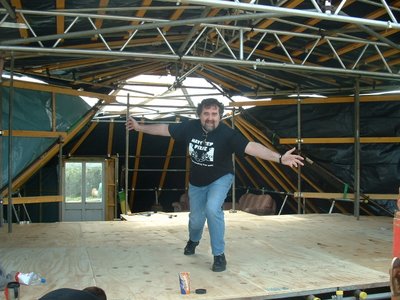 This may be a shorter blog than usual tonight because of my spare (and broken armed) glasses being sellotaped onto my forehead. I lost my others somewhere onsite just before we left tonight.

Nevertheless, I will endeavour to give as good and true account of today, for today’s the day when it really took off…

…In the small hours of the night, a great juggernaut of metal and chrome inexorably moved its bulk towards the moon dark field. Striding the country lanes and twisting around bends and corners, impossibly curving and curling its steel body on roads not made for one such as this.
It arrived, rested and its great load was taken from it, and then it was gone. Those in the field could now rest.

MAINSTAGE HAS ARRIVED, and when I arrived onsite this morning there it was its team of riggers scurrying (they had decided to scurry as it was thought a more arcane method of activity was more suited to West Cumbria. They tend to be milling about at Glastonbury or getting the shit together at Creamfields.) about erecting it. I was quite surprised to see it was smaller than I expected.

However, I get a little ahead of myself.
I had had to rush down to the site again, as my wallers had arrived and they wanted their instructions. So, we were off again with nowhere near enough coffee inside me. But two RED BEASTS for a pun’ in Spar and I’d be fine.

I found them onsite adapting the traditional stance of the British worker. One hand holding the cap between finger and thumb at an angle of 45 degrees from the crown while using the remaining three fingers to scratch the head.

“Hey, is that a site for psoriasis!”

The other hand will either be holding a hand rolled cigarette wide boy style or a cup of some beverage. All attention will be focused on the job in hand, that being the cigarette or drink.

But I make light of two highly skilled craftsmen here Ed and Dave, and after a short discussion about the wall and a brief visit from Alwyn to cut off extraneous bits of steel they began the construction of The Drystyan (dry-ste-YAN), the wall that fronts The Drystone Stage, and in less than eight hours it was done. These guys were a joy to watch, not that I had much time to do so.
I’ve done walling in my time and not made too bad a job if there was enough cement to be had, but these two were in a league of their own. There’s an old saying that a good waller will just take a stone, and once he has picked it up will not try to place it until he finds a good fit or discard it but place exactly where it should be. That’s what the skill is, forgetting mention that the skill is also in finding the right stone in the first place and not wasting time and energy on picking up duff ones in the first place. 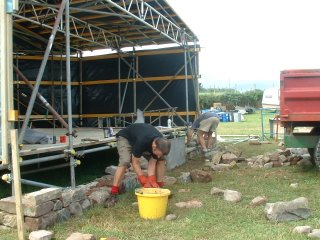 There is a poem by Cumbrias finest poet Norman Nicholson simply called “The Wall” check it out if you can it describes the Cumbrian Drystone wall perfectly. 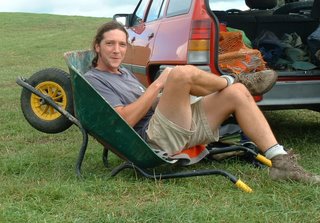 The one that was built today is magnificent. That stage has changed an awful lot, gone now is the rapidly thrown up collection of random cobbles of last year. An assemblage that threatened to topple should you fart upwind of it.
The new one is straight from end to end top to bottom, course upon course laid with care and precision, and you could on the top of it.
Not that I’ll let you, you could fall off and break your leg!

The stage and pyramid got the final covering on today as well, all is moving, all is progressing. I must mention here a certain Crow, well that’s what we call him anyway and as well as making some really useful aluminium brackets for us, he has given us some bolts of a canvas like fabric and it’s with this we have covered the outside of the stage and pyramid. I owe him a pint as it has proved to be a bit of a saviour. The Bar and bar stage are up, the Dance tent too. Loads and Loads of generators too.

But the single most important event of the whole festival happened today. Even more important than Big J coming onsite

Debbs arrived! Bringing with her the pre Solfest onsite catering! You cannot underestimate the value of this one thing, simply knowing as we are all putting the whole kit and kaboodle together there is this warm space full of soup, and sandwiches galore. Curries, Stews, Ratato… Ratatoi… Ratatuo… Goulash, Coffee, Tea, HOT CHOCOLATE, Cakes, Biscuits and piles of Fruit.
Armies march on their stomachs so they say. The same is true of festival builders but the end product is a hell of lot more fun.
Debbie is another who shall have stars affixed to the Tarnside sky, she doesn’t just buy in catering sized bins of factory made rubbish. She makes it all from fresh, and delicious. Last year she was actually offered a job by the Sawdoctors to cook for them.

Owen’s got his yurt finished!

And a first for me. I went pillion on Adams bike and was bounced around the field like billy o (how fast can he actually run anyway?) as Adam gave me the full Steve McQueen escaping from the Germans tour of the site. Made even more accurate in that we had no crash helmets on. But I must confess I did enjoy it and it may well have been one of those significant Father/Son moments.

Anyway tis late now, another day tomorrow which will be filled with just as much stuff to do. 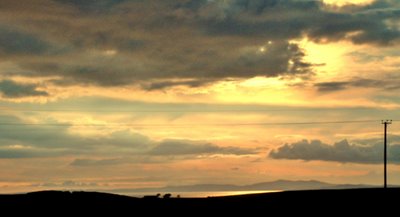