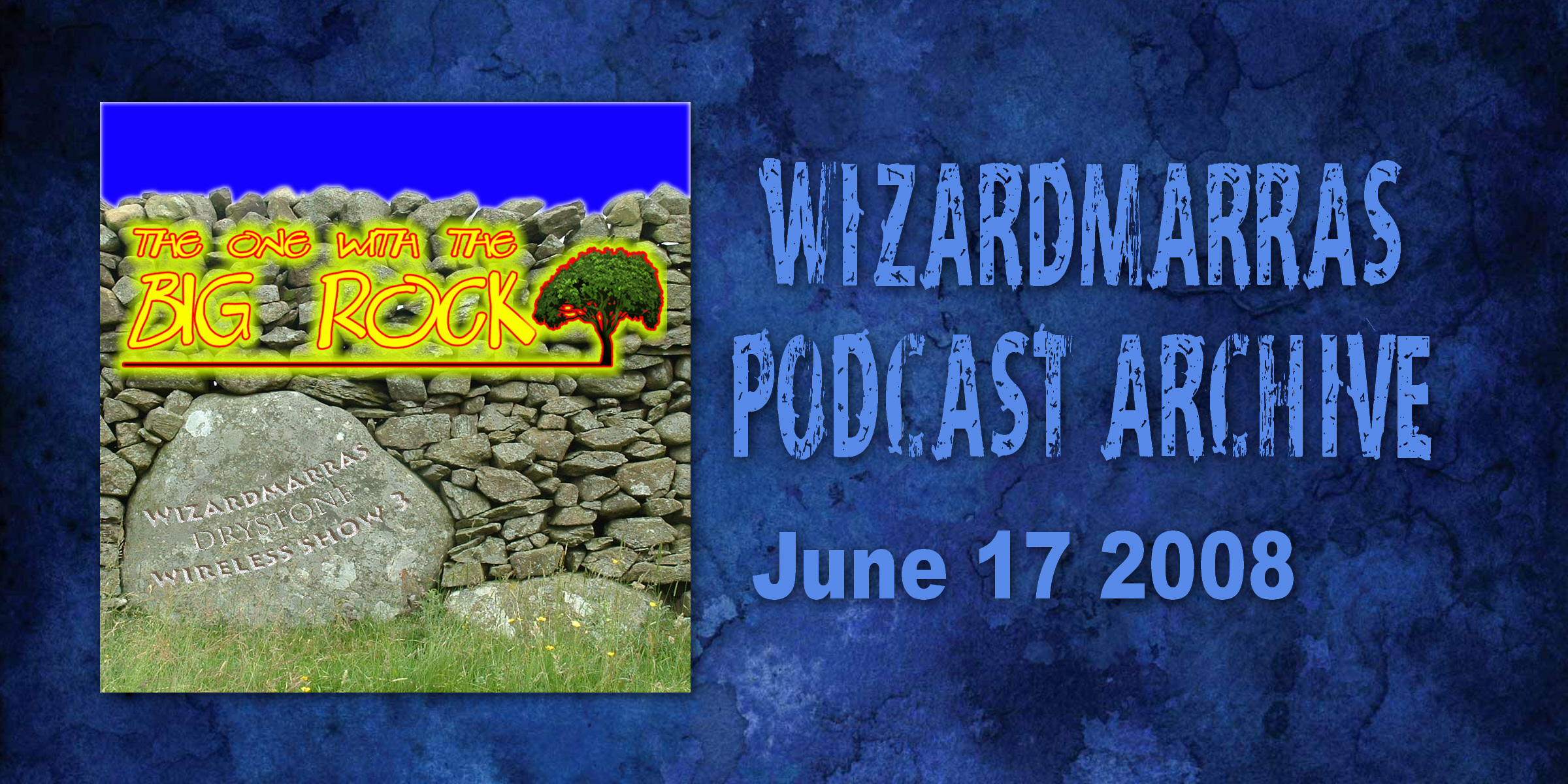 WIZARDMARRAS DRYSTONE WIRELESS SHOW 3
THE ONE WITH THE BIG ROCK

Unfortunately problems with my microphone mean that this podcast is without me doing any pretend DJ bits introducing the tracks. But in the great scheme of things that is no great loss to humanity, what is important are the brilliant musicians represented and their work is brought to a little larger audience. Check them out it’ll be time well spent.
The first piece of music doesn’t count though, well as it’s my podcast it opens with one of mine. This one is called “Tantric Dancing” and I did it yonks ago using EJay, and anybody who has ever used EJay will recognize some of the samples I’m sure. But it is closely followed by some real musicians who are one of the hardest working bands on the festival circuit.

The track is “Loretta” and you can’t say it’s typical of the band as they stride across musical genres confidently defying anybody who says that musicians should stick to one style and enable them to be nicely pigeon-holed. Loretta is if anything a treatise on exactly that, one minute a medieval romp the next a dance hall anthem with a cheeky snatch of The Eagles, “Journey of the Sorcerer” popping up. Great stuff from the album “Last Band Standing” Which quite often is the case, you really can’t stop them sometimes and that is no bad thing.

Next up a return to the Wireless Show for

who featured on the very first one. I could not resist putting this one up, Ric Birtill the “MR” of the duo writes bloody good songs with real tunes great hooks and literate words. If there is any justice in the world one day they will be getting lots of radio play and lots of cash for doing it. This track is called “Cut All Strings” do give them a portion of your time at Solfest this year if you are coming, you’ll not regret it.

KTB who is Katie Bennett and was on The Drystone last year is a delightful young lady who not only works as a solo artist but with her band LITTLE SISTER who also appeared on the Drystone last year. Katies track here is “Five” and I just love it, listen and let it speak for itself you’ll love it too. Another returnee to the Drystone this year and I’ve no doubt I will have more of his work up on here too. What can I say about Rob that hasn’t been said by others; not much I’m sure, the obvious things are that Rob is a Cumbrian Nick Drake, or a Tim Buckley in that he writes intelligent songs and performs them with passion and sensitivity as they did. But I never like drawing such similes to performers. Rob is Rob not Nick or Tim his songs and voice are his own and I’m sure it’s a voice that one day the world will enjoy. But not too soon so those of you who live here in North West Cumbria can come and see one of our own before he’s off on the world stage, he is one of the lynch pins of my open mic sessions at The Spinners Arms in Cummersdale being such a success and I must also mention his own venue The Number 15 Cafe in Penrith where Rob programs a fantastic line up over the year. Go there and see what I mean. BTW The menu is also bloody amazing and they probably serve the HOTTEST cups of coffee on the planet. Oh yeah, the song is “Things Get Washed Away”

Dragonsfly are another band I saw at Stainsby Festival fronted by the charismatic Maya Preece they play some of the most infectious dance music you could wish for. I saw them again just a few weeks ago at Wheaton Aston Festival and they were as good as the first time and I sorely regretted the fact that at present I have a torn ligament or some such in my leg that stops me from dancing. The track here “O’u Qu’t Etais” is one that when played live you just can’t help it, your feet move and you are dancing, and they do that for an entire set. FANTASTIC.

I said that not only acts who’ve been on the Drystone (or will be) but also those who didn’t quite make it for whatever reason. Hub are one of those, but they bear the dubious honour of being the first band to take advantage of using the demo upload page on my website. It’s only just gone up and in truth it’s too late for Solfest this year. But this track I like, I thinks it’s fair to say that it unrepresentative of the band and if you check out their myspace you’ll see what I mean and in honesty I’m unsure if they are right for the Drystone Stage. But they would do well on the Bar Stage and I’ll be pushing them to Alec who runs that stage for next year. The track is called “Pletinckx” and they cite this enigmatic word in their influences but I’m none the wiser. A quick Google search revealed several answers ranging from…

To White Pletinckx a strain of racing pigeons created by Mons. Plentinckx of Belgium of whom it was said “M. Pletinckx kept about 300 pigeons, which may appear to be too many,” and also a musician called Koen Plentinckx check him out at

You can hear samples of his work there. I recommend “Happy Bubbles” and “Whistling Kettles” though I somehow think that none of these have anything to do with HUB.

Another pair of astoundingly good young Cumbrian musicians their contribution here called “I Can Hear Those Hills” showcases their virtuoso guitar playing. They are at present recording an album which I am anxious to get my grubby paws on as it’ll be a belter.

The talent of the likes of Paddy, Jack, Rob, Laura James (who is on the last podcast) and others (who’ll be featured here in due course) leads me to wonder what exactly was in the water eighteen or so years ago to produce such a wonderful generation of exceptionally creative people. It is really good to be able to enjoy what they are doing though, and to enjoy a fresh upsurge of real music, played live on real instruments.

From last years Solfest, Nick Burman and Stef. M two of the nicest guys you could meet and who make some wonderful tunes, this track “Emu Wrestling” is just the business Nick taking The Didgereedoo to places Rolf Harris never didgereedid (I’m sorry that cropped up with the predictive spelling and a couldn’t resist keeping it with a slight alteration)

I’ll shut up now, until number 4 sometime in July.