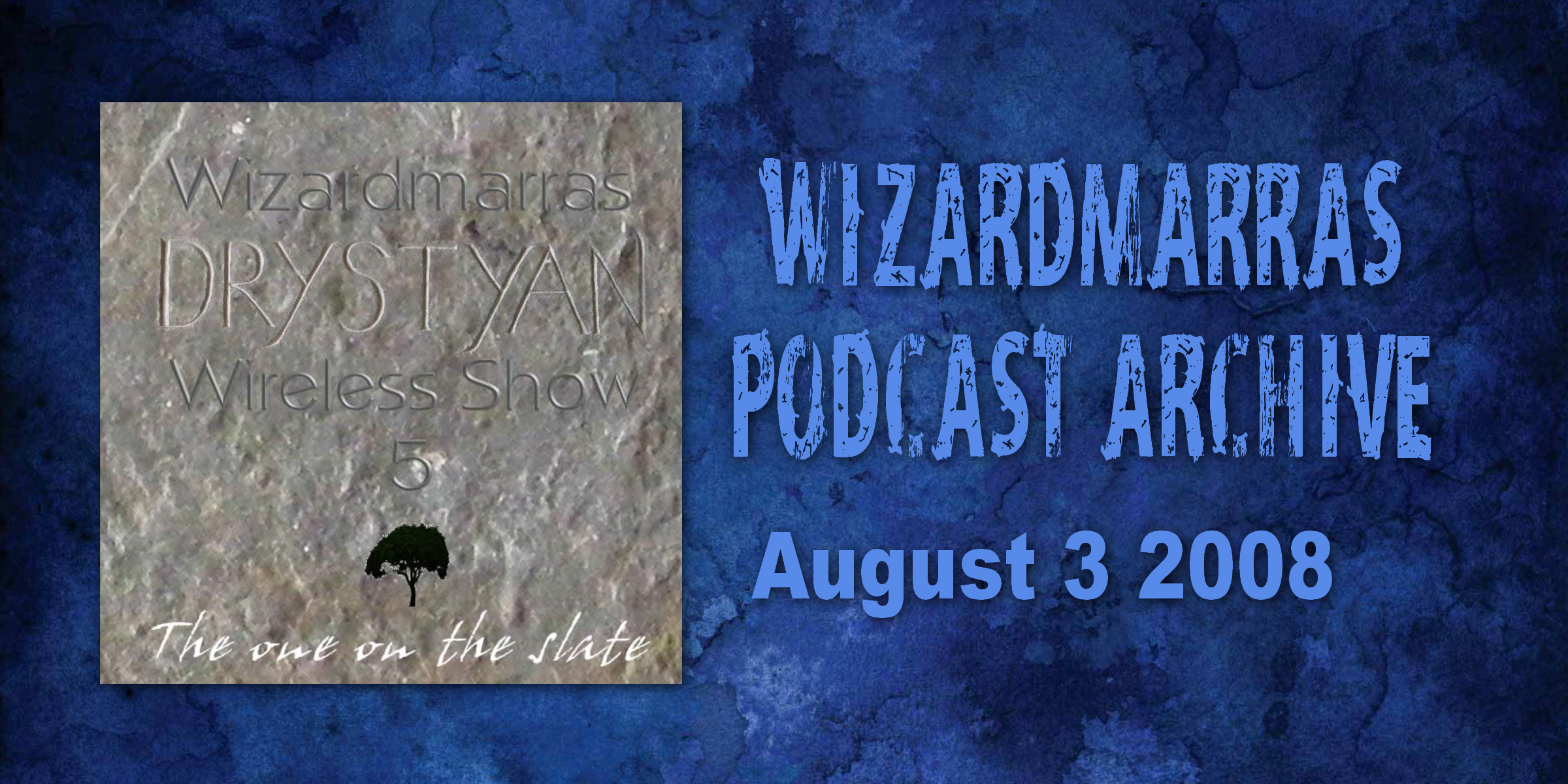 THE ONE ON THE SLATE

The penultimate podcast before Solfest! Kicking off with my latest piece of sequenced nonsense, “The Lonely Dancer” ’nuff said.

Who got in touch with me via MySpace and have just played by all accounts a cracking set at Hawkfest. They are a truly hi energy band and you’ll have to wait an eternal 13 months before you get to see them on The Drystone.
The track here “Go Make Somebody Happy Here” is a piece of pure ass kicking joy, and when I asked the band if I could use it on the podcast I got the lovely reply “It’s a track that was made for sharing.” How nice is that.

The tune inside it will be familiar to any fan of the Peatbog Faeries as it is the traditional reel “Lexy McAskill” one of their signature tunes from the “Mellowosity” album by the Shetland mega stars.

But to quote Bushplant MySpace page regarding the track.

“the single is a pounding beast of a thing, sounding like the bastard spawn of an illicit liaison between Alabama3 and S-Express at a Clare fleadh, all the while delicately embroidered with the silvery fiddling of Mary Custy, a star in her own right with 3 solo albums of her own. The single is available as a free download, with the request that a donation is made to a children’s charity, however small – ‘for the children of the world’, whenever. “

So it would be nice if you took that to heart and did the decent thing with a quid or two.

Next up another track from Paddy Rogan and Jack Hartley who I featured a couple of casts ago. These two awfully talented chaps who hail from East Cumbria (a cold land where all who dwell there wear black leather talking of grim days and darkling skies!)

They will be on the Drystone Stage over the Solfest weekend.

Would you like to know when? As you are aware if you are a Solfest regular, we don’t publish our running order until the weekend. Well if you go to

via your mobile phone over the weekend you can call up the running orders for each stage.

OUTROADS
“Hellbound On My Trail”

Over the weekend though, well not officially but I do know for a fact that half of them at least are coming to Solfest as punters so there may be spontaneous blues outbreaks in a session tent or two. The two track that I’ve featured here are from their new album “Goodbye To All That” and thanks to Eddy Lomas for the copy and for allowing me to put a couple of tracks on the cast. The First “Hellbound On My Trail” is pure gritty mean down on the crossroads by a steeltown and the devil drives a Cadillac with it’s headlights shining black. The other is “Amigo Mio” (Bacon) which for me reminds me of early Pink Floyd in there “Meddle” days and tracks like “Shamus” it’ll no doubt be reminiscent of other stuff too but I’ve not heard everything yet.

If I ever get my own TV show (not likely I know, but it’s a harmless fantasy and a comfort to an old man) I would have these guys as my house band. Jonathan Ross can keep his poofs, I’ll have these shabby bearded fellows. Choosing a track to play was actually just a case of sticking my hand in the bran tub of their music and using whatever stuck to it. You can find more on their websites. Like the brilliant cover of “Venus In Furs” or other gems such as “Lambing”. So then “Hangover Cure” is here and I salute The Wierdstring Band the ONLY band to have a Drystone Stage residency as they lead the (it’ll be three years old now so I can call it …) …TRADITIONAL SOLFEST CEILIDH on Sunday afternoon.

WILL MORGAN
“The Castleford Ladies Magic Circle”
Will is someone I like to call my friend. We have met literally a handful of times. We share a common link with Glasson Music Festival and Wheaton Aston Music Festival. The former we have both worked at (4 or 5 times each) and the latter four or so times for me once for him. He works as a compare though he is a fine singer and musician and I always try and catch his act. Among other things he is for my money the best practitioner of the late Jake Thackrays work on the circuit nowadays. Anyone who is of an age with me will remember Jake Thackray guesting on many black & white televisions shows of the sixties. He sang funny songs in a bit of a funny voice in those days with titles like “Bantam Cock” and “Sister Josephine”. Now I understand the humour much more, most of which had gone over my head as a youth. Will brings them to life again as you’ll hear in this one taken from his album “Will Morgan sings The Genius Of Jake Thackray”

It may be a long while before he’s on the Drystone. But he will be one day.

Richard Anderson. This is his second outing here and the track is the single from his CD “Songs That Chose Me” which frankly hasn’t got a bad track on it. I can only advise you to go to his website and purchase a copy.

It’s odd, and I’m gonna fess up here. Richard has been trying to get a gig at Solfest for a while now, but the demo’s and stuff of his I’d heard. Well it didn’t quite hit the mark for me; I don’t know why? was it his voice? The pitch not quite to my ears or was it the tunes? I don’t know but this album is so bloody good I actually play it a lot. Until you are in the (VERY fortunate) position of getting loads of free CDs from people wanting gigs, all of whom need a fair listen. To make time to listen to stuff that you really like shrinks as the years go by. But Richards there in that select clutch of albums and demos, he also plays a cracking live set too as I’ve also seen and you will too this year.

As they say on their MySpace page they sound like “Machinehead meet Morris On” Micheal, Claire, James and Joel are a true family band being Dad, Mum, and “the Boys” occasionally joined by daughter/sis Nicola. The James – Joel combination on Djembe and Accordion that doing killer business on classic metal anthems.

Here is “Black Knight” from them, for you by me

Dragonsfly are part of The Stainsby Connection. In that the are an act that I have first seen at Stainsby Festival. As with Silverwheel and KTB last year (and some tasty contacts have already been made at this years FORTIETH Stainsby festival).

Led by the lovely Maya Preece who can sing in more than one language which I find very impressive Dragonsfly are a band that really make you get up and dance. This track sees them in more sedate pace and allows Mayas vocals to take you on a gentle ride.

Like Dragonsfly, Flutatious have been featured on here before. But why let that stop me from putting up more of their superb tune making.

Most of the acts featured on this cast will be at Solfest this year, the exceptions being Will Morgan, Outroads and Bushplant. Those that are, apart from one act are coincidentally on the same day too.

What day is that?

That would be telling wouldn’t it

From this podcast on to make room on the “podmatic” website one previous episode gets removed so Episode One has now been deleted.

Hopefully I’ll get them archived somewhere on my website.