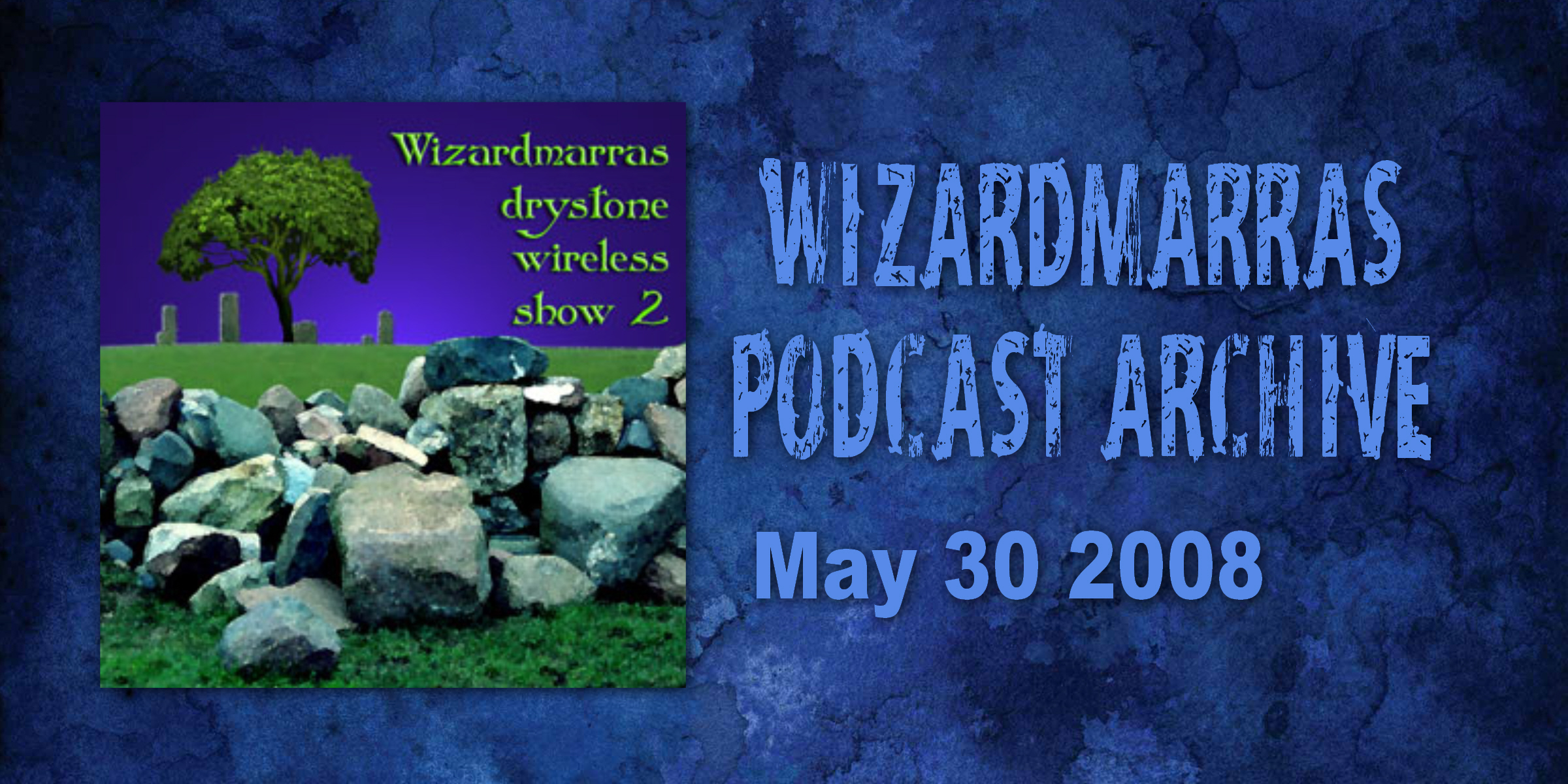 A huge apology first for this current podcast being delayed an enforced temporary loss of my internet has been a problem in so many ways.

So apart from the title (which will mean nothing to listeners outside the UK) whats big about this the second installments of Wizardmarras Drystone Wireless Show? Well first off I’ve got to say it has an exclusive track from the ever popular stars of the Drystone for two years running THE 3 DAFT MONKEYS. The track “Paranoid Big Brotherr” is from their brand new album “Social Vertigo” and I could have played anything from it as it’s all good. A huge thank you to Tim Ashton for allowing me to use something from the album visit their website and BUY a copy you’ll not regret it.

I’ve been lucky enough to see the Monkeys twice in as many weeks just now, first at Wheaton Aston Festival in Staffordshire at what could be the last fezzi there and the Monkeys were possibly the last band to play it and they finished it in style after initially having a very cold crowd to please turned the atmosphere electric becoming one of the very best gigs I’ve seen them do. Then a week later they were at Knockengorroch Festival though timetabled far too early in the day to really kick ass they still gave a cracking set.

I’m doing things out of sequence though so to get it all back on track the first music you hear is mine it’s short and sweet to start it all off and should you be interested in such an inconsequential musical gewgaw it’s called “Fresh Eight” Why? Because that’s what came into my head when I saved the file.

Next the real music begins. It’s from “FLUTATIOUS” and the track is called “Space”, Flutatious are one of those bands that when you hear the demo that’s come through the post you get a tingle shooting up your spine and you know you have to book them. They will go down so well on the Drystone, wait until you hear what they’ve done with a brief snippet of Faure’s “Pavane” (it may even feature on a later podcast, you never know.)

Next is the aforementioned Monkeys track, followed by “Follow The Lights” from DELIVO a now sadly non existent band who were the very first band to perform on the Drystone Stage. Although some purists may insist the first “official” performance was by fellow West Cumbrian band “THE MARRATIMES” (hear them on the next podcast). But Delivo did do the business first for the benefit of Border Television. Made up of Matt Kirk on drums (See him play guitar with Sheepskin Beard on the Drystone this year) Dave Connor on rhythm guitar and vocals, brothers Dave and Mikey Proud on Lead and Bass guitars. As I said on the podcast Dave is on the road to becoming a Dad and bucket loads of love and congratulations to him and Jude.

Delivo are followed by the wonderful SLEEPY ED HICKS and the old standard “Frankie and Johnnie‘ performed however in Eds inimitable style. Ed was one off the first program of acts I had on the Drystone back in 2005 it’s first year and Solfests second, his fantastic performance and great reception guaranteed a return booking in 2006. If you can find him performing anywhere near you you go and see him and you will not be disappointed

The next two tracks are from two members of the same family. First the daughter, LAURA JAMES and a beautiful track called “All I Ask” performed live at The Spinners Arms, Cummersdale, Carlisle. You can also hear it on the”Wizardmarras Saturday Night at The Spinners “myspace” but it will be getting changed very soon, there is also a really nice studio version of it on hers. Laura like Rob Heron who was featured on the last podcast are still (in the great scheme of things and on a global geological timescale) very young, being so talented at such a young age can only mean one of two things they will either go a very long way or they’ll peak soon. I think the former is true in both cases.

Following Laura is her father CHRIS JAMES who doesn’t actually look like a rum and whiskey soaked sot whose life was wrecked by a woman who “Done him wrong” in the ante bellum land of levees and satanically attended crossroads. No he’s from somewhere near London Village but that doesn’t stop him from singing the blues like he’s lived it. The track here is “Will and Testament” from his album “Trick Of The Light” and like the Monkeys album I was hard pressed to choose what to play. Honestly there is not a single bad track on the album, for a full flavour of what he can do (if you haven’t already realized that he can play a guitar like he was ringing a bell) go to his myspace and enjoy and again there is more on the “Spinners” myspace too.

Hands up next as I must apologize for I have involuntarily reversed the Christian names of my next artist on the podcast who is in truth LOUISE MARY MARTIN (which I should easily remember as it is also the name of one of my step daughters, I slap myself for being an idiot) Louise gives us the quite hypnotic and wonderful “Green Sweets”
I love the sound of Louise’s voice, jazzy and sexy and damn fine music, a big hit at last years Solfest and she’ll be returning again to the Drystone this year.

Last of all a tune by my son ADAM WHITTAKER. (hey if I can’t practice a little nepotism here then where can I?) Adam was Stage and Technical manager of The Drystone for it’s first two years of life and the hard work he put in gives him the right to be included anyway but It’s a more special reason that the track “Dancing Maiden” is here. The quality of the recording is admittedly poor but until I find the CD that’s got better stuff on it will have to do.

On Tuesday 20th May 2008 and 5:30(ish) his daughter JASMINE TANHAYER WHITTAKER was born and it’s to her that this podcast is dedicated, my sweet wonderful and tiny tiny granddaughter.