Well after all my fine talk of ego and how there was no room for Prima Donnas at Solfest I well and truly blew it; with several minor strops and a full on drama Queen exit!

More of that later as there’s plenty of good stuff before that.

It was a bit of panic getting down to site though. Karen and I had been enjoying our last Saturday lie in for a few weeks, Solfest, Wallingford and Knockengorroch all in a row. When the phone is ringing and we have to get down on site quick as Chris is leaving and taking the keys with him.

“To the Marramobile Karen, we must fly!”
“Not with it’s dicky bushes we won’t.”

We were speedy enough to catch Chris hurtling past us in the other direction in Shaun’s van.
Bugger!
We continued to the site, there was plenty to be done even though the rain was still grim. Things left out in the rain that needed shelter, and that stage and pyramid needed finishing.

So, after a brief sit and a coffee Karen set off to do her Solfest work. Like the rest of us Karen, The Ladymarra has her own Solfest “specialisation” and it could be argued (not by us though) that hers is the most important job of any committee member as she is our Community Liaison Officer.

It is important because every year we have this big party in the backyards (so to speak) of quite a large number of people, and inevitably rubbish can blow into neighbouring fields. So, Karen is going round and getting to meet every one of these households, finding out how they feel about Solfest? Any Complaints? Would you believe it we have had none. Our neighbours are the most supportive group of people we could ever meet. After the (not surprising) initial wariness in our first year, they can’t wait for the festival. We do of course give complimentary tickets to them; and why not, it’s a small price to pay for their support and they still buy extra tickets too. Well, they could, until we sold out.
On occasion, I’ve been round with her and it is so nice to be invited into their homes for a cup of tea and (lovely) cakes. 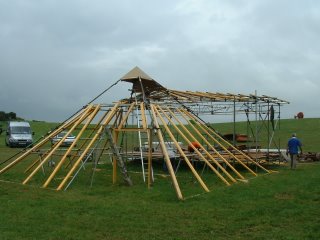 Also waiting onsite this morning were Brian and Graham, both had been to Solfest last and both had bought tickets so they had no other motive to be there but to help. That’s what’s so good too people come and give up their time simply because they think we are doing something good and want to help make it happen.

So, we set off giving the stage its first re-adjustment of the day. It was during this that I had my first grump. A minor one in truth and this was stylishly executed comprising of a full ten-minute rant delivered with almost Shakespearian eloquence, punctuated at the end with “Right that’s it I’m done!”
The applause was deserved.
This done and dusted and wondering what to do next Graham and I got into Brian’s pick up and we drove to Yonder field were we collected stone for the Drystone, (two journeys there for that and another for some lovely rotting wood!) Then Brian gave us a present, he went home and brought some beautiful slate pieces. You will see one in the centre of the wall all being well, but that’s all I will say for now about it, cause it’ll be dead special when it’s done.

Graham as well, what a guy! I’d come up with this idea you see. We’ve got a few stilt walkers coming and as I’ve said, we try to look after our performers. So I thought if we had one or two really high benches that stilt walkers could sit on to “enleg” and “deleg” and also just to have a rest. So I’d scribbled out a design, and Graham (a joiner) took it and said “yes” and took it away, then came back a little later with a new design, a lot better in functional terms an awful lot more elegant and cheaper too.
I said “yes”
I’m really looking forward to seeing them.

Not long after this was my second incident, I’ll not dwell on the details but I’m ashamed to say I ended up telling Tosh where to go, well actually it was more like telling him how to go.

The work still progressed, Brian seeming to be on several parts of the stage and pyramid at the same time with a Stihlsaw lopping off jutting ends of scaffolding like he was deadheading roses.

The return of Chris and Alwyn was the overture, and led into the first few bars of my great Divaesque exit from the site.

I have no defence for it, it was a strop. I was tired from lack of sleep and it seemed prolonged exposure to a wet field since Thursday and was just too damn grizzly.
Again, it concerned those compromises. In this case, one, which I truly and unswervingly believe, would have rendered the function of the pyramid as a backstage area useless. Nevertheless, the other party whose message had been relayed was as adamant in their belief of the necessity of the alteration.
That part of me somewhere deep inside that thinks its Lou Ferrigno started turning my eyes and skin green.
Hoping Alwyn hadn’t seen the change in pigmentation I got up to leave the caravan before I was ripping its flimsy metal asunder.
“Calm down Alan, I think I’ve got a way….”
“Bugger” I thought, “He’s noticed I’m not pleased.”
I am making light of the fact that to my total shame I walked out of the van to the car loudly saying “KAREN GET ME OFFSITE NOW!”

I was fuming, I had made compromise after compromise and it was now feeling as though I had now sense of ownership of the stage and pyramid. So diluted my ideas had been to serve the practical at the expense of the aesthetic.

But I’ll now make a public apology to Brian and Graham who, unlike my regular friends on the Solfest committee and elsewhere had no idea that I am a temperamental old bastard sometimes. But really what I did on Saturday was beneath me.

After a brief in car chat with Alwyn (In future years there will be a constellation in the heavens above Solfest, one star just isn’t enough for him) he tried to assure me that he could try and make this problem work in a way that suited everybody.

I wasn’t convinced and left the site in a bad way (that’s an internal feeling not more histrionics).

So there, you have it.

At least if ever one day, should I be fortunate enough for my star to rise a little higher in the heavens. Or even next week should someone say, referring to me…
“…He can be bit of a mardy sod and right up his own arse!”
You can turn round and say
“Yes he said that himself!”