The following interview republished here has not seen the light of day for some time. But I thought it would be good to put it up here as it fills in some of the gaps and my memory of those heady days is not as good as it once was. though now I come to think about it I couldn’t remember them all that well at the time it actually happened.

In case you’ve forgotten him Jack Daniels was a high profile DJ on Wonderful Radio Monica, a pirate ship anchored off the Scottish coast. Nice fella, I can’t remember his real name but he got his Radio Moniker (ha ha, see what I did there) for his liking for a certain tincture that I’m partial to myself.

jd: “So Quincy, tell me a little bit about the evolution of the album, to me it has the feel of American steel towns, of National Guitars being welded to the back of a Harley and saying all right USA this is monkey business!”

b: “I couldn’t have said it better myself Jack, you see after I got out of the unit and started blowing “Rosetta” (the name of his (almost sacred) harmonica, after Sister Rosetta Tharp.) a few times for any audience I could get.

He was the best double bass player I ever met, only three foot two inches tall but he could dance with his instrument!”

jd: “It was a tragedy that he died not long after you finished the album.”

b: “Yes, a great loss to the blues, but maybe he just rode the whirlwind of the double bass once too often, but he was onstage dancing when he died,

crushed by his own bass…

…Completely out of his tree as well, he’d taken the lot!

God I miss the old bugger!”

jd: “You were in band together for a while with Mick Bethnal and Mick Green?”

b: “Yeah, “BETHNAL GREEN” we were called; Mick Bethnal on Drums, Mick Green on guitar, Mooney on bass, and me singing and playing harp.

“BETHNALL GREENS CARNABY DREAMS” He left and we became

“BETHNAL KENNINGTON AND THE GREEN JOHNSON”

Mooney came back, Mikey stayed on for a bit and in came Mickey Thompson on Saxophone with Blind Mick Blinky on keyboards we were

DOWN ON KENNINGTON GREEN”

b: “No! Too bloody confusing!”

jd: “Can you tell me a bit more about your work with Vivian Carnaby – Fadd?”

Anyhow that’ll do for now, hopefully in the next week or two I’ll get something up here about my outings to Stainsby Festival and the brilliant gigs I’ve had in Stranraer. 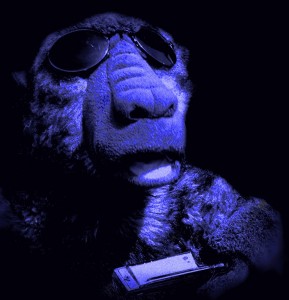