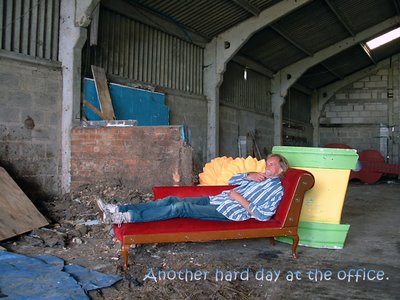 How can one make today’s events sound as interesting as the previous entry?

Skipping from the sweetly scented chamber, I share with Karen, singing I came to the pcs. Switching on the first with a Jackie Chan like stab and then as I executed a perfect back flip my toe pointing Nureyev like touched the switch of the second.

Answered its fellow and I bowed before tackling the emails and printing things such as the duty managers’ rota for filling in and the panic button numbers for the security caravan. This before calling the guys doing the lighting on the Drystone Stage. Trying to make sure Tosh gets the message that we’ll meet him onsite at ten to give him the keys to the van.

A brief pause to call Jo from Wallingford Bunkfest where I’m working a week after Solfest, and have a “fellow festival organiser” bonding chat with mutual sympathy and “Oo never mind soon be all happening, then you can have a sleep!” She seems a nice lady and I’m getting to do some more street storytelling which I like.

Then back to printing that must be done before…

Before doing the kind of job that, you would not be doing if you did not have a festival to be doing it for.

However, here I have to just lay it on the line. There’s no way to make this sound fun, it wasn’t, it was at best boring and at worst unpleasant. But I’d promised Big Bubba J, that I would do this job for him, and god knows I owe him.
Big J, The Rock who has been there by my side at many of my endeavours a true friend and someone who I would do even more boring and unpleasant things for. Unless he reads this in which case that is it mate we are quits! 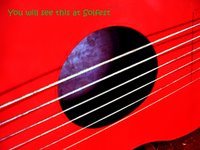 I was pulling apart the panels which made up the sides of last years pyramid. To recycle into the new one and other things. Breaking things apart and removing the nails from every piece is not much fun. One cannot be truly destructive and really enjoy it. Also the weather was changeable I had to work inside the large barn at SOLFEST CENTRAL COMMAND JAMEATER BASE. This has previously been occupied by both Cows and Pigs and their leavings still make their presence felt on damp days. I know, I felt it through my jeans and on my fingers. But it did feel good to get it done and that little bit more progress had been made.

During the day while there, I did have a meeting with friend and sorted out a mobile recording studio for the Drystone. This may or may not come to anything but it reeks of potential for what we can offer in future. 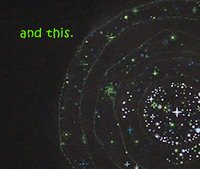 Karen returned early from her job, which today had taken her to Egremont, so we sat in the car at JAMEATER BASE while we waited for the most exciting part of the day. You think SOLFEST’S good; you ain’t been to a SOLFEST COMMITTEE MEETING!
They are more bearable than an ordinary committee meeting is, and it is something we all care about. So, it can get passionate at times. But tonight’s was OK, the program looks really nice with a little more to read in it this year. You love Eye Spy! Angie has fallen off her bicycle in Canada and broken her leg, and we talked about some quite good stuff that I can’t say anything about. But I know that’ll just tease you.

Finishing at nineish and off to Cockermouth for Fish and Chips and brief visit to Karens daughter before shooting back down to the site to hand of the keys of power to Tosh. The poor man has a dismal wet night ahead of him.

My turn once more tomorrow. So no diary until Thursday night.