Yes, I know it’s been too long away again, but it’s never too late to do it and it’s slowly building up over the years so maybe when I’m dead and gone my great great great great grandson or daughter can read about me and my exploits, thoughts my hopes and fears for our future world and say to themselves “and I thought me dad was a Looney!”

Three reasons for this missive

The First is one of music, of giggling and singsong celebrating

from machine to ears and inside

for tunes inside of you

The Second is one of the World Spider

and the global web she weaves, we dance with butterfly nets in hand

to catch the internet in a jar

And on that web I’ve hung my site

in a form that’s somewhat new

The Third is most important

being the season of the year

to shout FESTIVIOUS BULBERATIONS in a Dickensian kind of way

So it’s MERRY CHRISTMAS to you all

seasons joy to you

Where that came from I’ve no idea, it just did.

So lets get going. A while back now, September to be accurate, my good friend Boz who’s one of the two main men at OFF THE TRACKS festival offered me the job of MCing the new BLACK BARN stage at the summer festival so I went and did and it was brilliant. So here on the podcast I’ve got something from just about everyone who was on that stage.

What was really good was the fact that the music was kind of stuff I would be happy to put on any stage I ran, it’s fair to say I was in my element.

The really good news too is that Boz gave me the permanent gig hosting it, that’s twice a year spring and summer. Thank you indeed Sir Boz.

So here’s the podcast

THE OFF THE TRACKS BLACK BARN SPECIAL 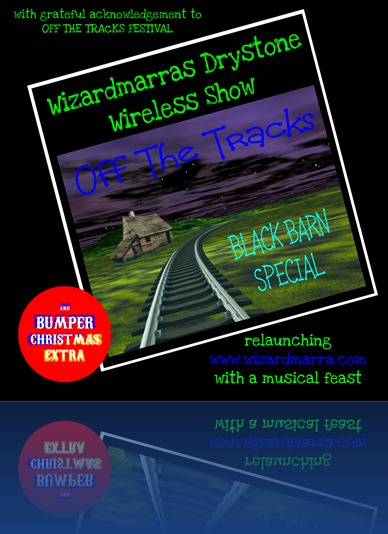 I’ll just briefly run through the bands as I’ve loads more to write yet about my website relaunch. As always the bands name will always have a link to their respective websites if they have one

These guys have been keeping it real since the sixties, and keeping the spirit of Viv Stanshall alive with it.

ROUGHNECK RIOT – THIS IS OUR DAY

Despite The Levellers sound on this track the punk ethos is beating is its vibrant heart here.

THE BEEKEEPERS – DO YOU BEHAVE LIKE THIS AT HOME

Led by Jamie Reed of Big Brothers Little Brother this band now not gigging sadly are virtual legends in Derbyshire.

Spookily good music by a man playing an enormous pie

This is one of the many incarnations of Chris Hall Zydeco master ninja of the midlands. At OTT he played merely as Chris Hall

The sixties of psychedelia, swirling liquid projections free love and pop art are here in floral painted spades with both dream Circuit and Earthling Society

She sent me a demo trying for slot at Nuts, can’t do that just now so here is on the podcast.

These guys are amazing and audiences cannot get enough of them

THE SOCIAL IGNITION – CAN’T CATCH US

Jay from the band thrust copy of there new CD into my hands at OTT here I return the favour for this excellent company of skameisters. Buy the CD, it’s good.

It’s Christmas and I can be self indulgent if I wish on my own podcast. This is all about the Millican Dalton of renown here in Cumbria. Some words used are from notebooks written by Dalton himself and I’ve also used a bit of Rogue Herries by Hugh Walpole

This crackingly good track is one of a whole albums worth of FREE downloads off their website. How good is that.

This is actually on her website for sale with proceeds going to The Salvation Army, go on do the decent thing and buy a copy. Do that for Christmas or be a tight-fisted hand at the grind- stone, you Scrooge! a squeezing, wrenching, grasping, scraping, clutching, covetous, old sinner!  Hard and sharp as flint, from which no steel had ever struck out generous fire; secret, and self-contained, and solitary as an oyster.  The cold within you freezes your old features, nips your pointed nose, shrivels your cheek, stiffens your gait; makes your eyes red, your thin lips blue and speak out shrewdly in a grating voice.  A frosty rime on your head, your eyebrows, and your wiry chin.  You carry your own low temperature always about with you; you ice your office in the dogdays; and do not thaw it one degree at Christmas.

Right so my website if you take look you’ll see it looks different right away. But rather than just having new paint job it’s up there now to do much more of a job. Which is to get me gigs, I want a summer out and about rain or shine at fezzys meeting people and having fun. Crucially though earning me a crust so Karen and I can get wear new shoes once in awhile.

Not only that though but from the site you can get here to the blog, the podcast, the video channel as well as all the Facebook (yeah, me using Facebook, I’m not saying I don’t hate it anymore I found these days you can’t not really be on.) though I do have a big stick in my hand when I’m on it, twitter etc. etc.

This blog will have an entry at least once a month from now on. Bluesmonkey less often but he will be producing a weekly video newscast, a microbulletin of about two minutes long. Anyway that’s what he says, knowing him it will have something of the mooncapped about it. That will be accessible through the video channel and on his blog. I’ll be twittering every couple of days too. The podcast will be up every six weeks. I’m going into 2013 a’running and a’fighting to really make some happen that will be both fun and profitable.

Eehaa or Yippee should probably go in here

Talking of videos here’s two that deserve a look.

It came to my attention that the excellent Fiona Clayton topped the folk charts not long ago,..

…and another bird takes flight,

Finally a very heartfelt and sincere