Onsite by noon, cheerful as anything! How a good sleep sweeps away grumpiness and foul black dogs of depression.

With this revived spirit I set about cleaning up the caravan as it was in a bit of a state. That soon done I made myself a brew and sat down to figure out what I was going to do for the rest of the day. But I’d no sooner taken a sip of my coffee when Alwyn showed up bringing with him a man with a generator. Never mind mainstage and the others, The Drystone will have POWER! We were going to be getting a green diesel genny for this part of the field and it is something that we will have in future but unfortunately the one we were going to get died a little while ago, so we had to revert to an ordinary one. Never mind though, this year the Drystone is bigger, better and as I have said before will present THE FINEST AND BEST SHOW IN ALL OF ENGLAND!

Not long after Mike and Bryan arrived, Bryan (or as we all call him, Abbott) is provided some of the sculpture that will be around the site, if it’s big and steel it’s pretty certain it came from his workshop and made by him or Adam (he’s my lad by the way, and as I know his brother Nik will be reading this “HIYA NIK!” it’s a shame you can’t be with us and I will miss you over the weekend.) 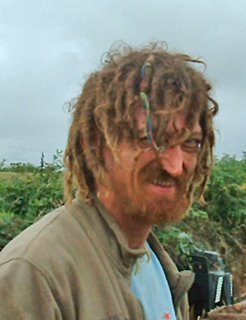 One of these pieces was originally on display in Wigton and is a selection of letters that spell a particular sentence, at Solfest however we shall be scattering these letters about the site. If you go to the info desk there will be sheets that have a clue on them and should you fancy it you can go round the site noting the letters and try to figure out what the sentence is. I should warn you though that there are 1651 different permutations of the letters making up various words and phrases, 1708 if you include swearie words and other offensive combinations. I don’t know if a prize can be arranged should anyone come up with the right phrase as Solfest goers from Wigton do have an unfair advantage. 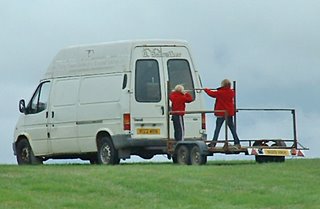 ELLIE & MIA TAKE A TURN AROUND THE SITE

I was intending to paint the crown of the pyramid today but the weather is one minute warm and sunny the next damp and drizzly, so I decide to leave it until tomorrow when the forecast is good.

As the day wore on I wandered over to Tarnside Farm Caravan Park, well more of a jog actually as I was needing to use the facilities there quite urgently. I had fallen asleep earlier and woke to the sound of Chris Evans on the radio and if that does not inspire anyone to go and evacuate quickly nothing does.

On the way, back I stopped to check out a few other bits and pieces that had arrived. Like the small “alter” type thing that’s on the hill just as you enter the site and Abbotts lovely SOLFEST TREE. This hill has the best views on the entire Solway plain. You can see everything in a 180-degree panorama, and is so nice to just sit and enjoy the world. Tosh is planning something here, I don’t know what yet, we’ll just have to wait and see. Ambling back to the caravan, I was beset in a matter of minutes by a whole covey of Wises and after chewing the fat for a while I watched them drive away in three different vehicles looking like a scene from “The Big Country”. Hunger was now nagging at me that it was time to eat something so off to explore the larder of delectables that I’d brought for such an occasion. I’ll fully admit now that “delectibles” is not an accurate description. I’d bought some stuff especially for this week but some was the remains of our “festival food stocks” left over from gigging at the events blogged earlier here.

I selected a tin of beef casserole, I should have known before I opened it not too. I’m not daft; I’ve lived as a single man for many years. I can cook, I’m fully aware of what’s good and bad…
…So why, why, WHY did I buy a tin labelled “Goblin VALUE beef casserole” anybody with half a brain knows that the “VALUE” label is shorthand for “inedible cheap crap”. I should have left it well alone, when I realised I didn’t have a tin opener I should have told myself “No, don’t do it. It is a sign that this is bad food!” But no as I realised that this was just the opportunity I needed to blunt that sharp kitchen knife I’d brought.
So, I did it.

Pouring the lumpy grey sludge from the can didn’t even stop me, and as I heated, it took the first taste.

“Oh my god it’s made from real goblins!”

But as I said, I can cook, I can rescue this. So taking a sachet of instant soup from the cupboard ripped it open like Gordon Ramsey on acid and stirred it into the slime that Orcs from Mordor would look on as a la’al bit kacky. Then with confidence plunged once more the spoon into its now bubbling heart, which had taken on the appearance of Saturday night street vomit and Mmmmm!

I realised why that soup had remained untouched in the festy box for two years; it tasted like shite as well. So it was unceremoniously scopped into the hedge.

I didn’t feel hungry for another two hours when I dined on several rashers of bacon, eggs and beans.

Hilly arrived as I was eating and we spent the rest of the night enjoying that which all men and women the world over do. Having a good crack until Karen arrived about half ten.

A little later, I set out to lock the gates. Clouds covered all of Cumbria, or so it seemed and boy is that one dark field when you can’t see the moon, when I nipped out during the night for a pee they had cleared and the sky was clear with the brightest stars I’d seen all week.

It has been a good day.