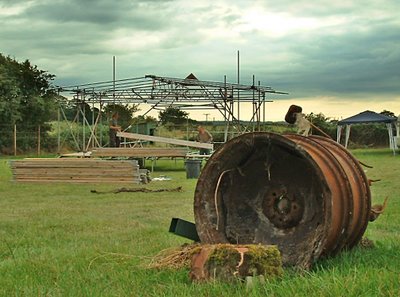 More activity on the Drystone Stage today with its roof finished, all that remains now is the stage floor to be covered, roof tarped, pyramid walls clad, the Drystone wall built (first making sure a trench has been dug for the wiring under it) and all the other little bits and pieces. Elsewhere on site not a lot has happened. Hilly has brought the frame for his twirly spirally thing (that isn’t actually a spiral). It’s certainly a spinny thing. So, when you see a twirly thing that spins, you’ll know its Hillys. Other than that it was relatively quiet day, Shaun and Paul being the scaff experts and much of the day was spent talking to Ben and Trina, Ben being responsible for the somewhat hung over state I was in. However, we did drink a bottle of Brandy between us the night before. Purely for medicinal purposes, as the night air was bracing and chill. This state was not conducive to going and picking up sixty scaff boards for the floor of the stage. I just about managed without collapsing but I fear I verily nearly killed Ben with the task. A huge thank you to Alan Wise for the help with transport from JAMEATER BASE to the site. The board went on the stage, another job ticked and done. 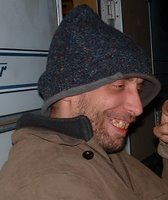 I’d told a few people that we’d be onsite that night and if they fancied coming down for fireside drinks and conversation. So, that evening a small party had gathered in lee of the caravan and Ben’s ambulance (he believes in being prepared) and was hoping for a rather splendid night. The main attraction of which being the Perseid meteor shower, promising may be as many as twenty or thirty meteors an hour. Sadly cloud cover meant that was not the case and I saw one all night. 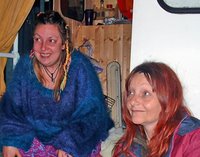 Still another bottle of Brandy was summarily dealt with, many of the wrongs of planet earth were sorted out, and we retired content if inebriated.

Earlier I had christened the stage with a solo harmonica performance, and it didn’t half feel good.

I woke early at 6.30 and again at 8.45, by 10.15 I’d almost mastered the art of waking up and was ready to consider trying for the job of getting out of bed but knowing that I didn’t at that moment have the necessary skills to manage.

Ultimately I triumphed and was able to administer Coffee for Karen, Adam and myself.

I must remember not to drink when I’m with Ben; he is a very bad influence on me for, as everybody knows I am a most temperate individual and not usually one to take strong drink. Fortunately the head space I was in was suited to walking around the site trying to decide where various bits and pieces of art work are going to be placed, so that’s now a little clearer in my mind but I can’t decide fully until there are other things up on site. That way I can take into account an objects surroundings as we don’t want “lose” a beautiful work of art due to the fact that a recycling skip is six yards behind it and ruining its appearance. 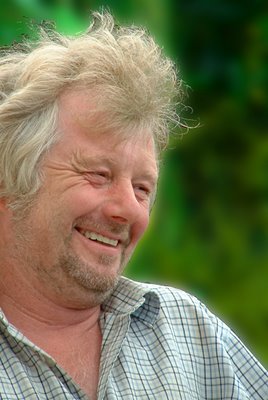 Karen & Adam had gone to JAMEATER BASE to paint the bar and I spent the day mainly feeling lousy, I am a moody bugger at the best of times but sometimes it creeps up unawares and I just want switch off. I was requiring full shut down, but had waiting until Adam returned to do his turn of duty in the van. As the afternoon wore on I had picked a little and visits by Owen, Hilly and Wilson turned my spirits for the better. However, I was still jaded and when Karen and I finally returned home I was able to conk out completely.
It’s silly really; I not had a physically demanding fortnight. But I still have a lot to do and sort out both on and off site before Alan can have a rest and I put on Wizardmarra for the weekend. 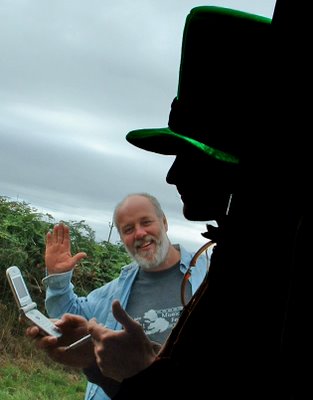 I wish it was now though, but it’s not long to go.