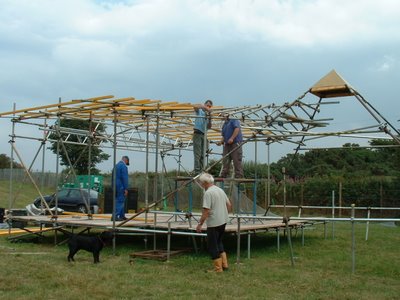 This has been a loooooooooooooooooooooong! Couple of days, so it’s taken its time to get done. It’s late now but from the Solfest message boards I see that people are reading this and Delores has even pointed you my way. Thank you indeed, it is nice to know that I’m not a sad bloke on his own with PC.

“Good Arfternoon Sir, could you accompany me the festival.”

It seems such a long time ago but …was it Thursday? I think so, I’ve even had to struggle to remember why I was onsite so early as I write this at O Bugger O’ Clock in the morning.

THAT’S IT! Two reasons. First Adam had to get picked up by Mike to take his bike to the dealership to get it fixed, he was stuck onsite, and second, Alwyn was expecting a delivery.

(As indeed he was last year. How the mystically the mystic forces of coincidence work.)

…of office units, storerooms, toilet blocks and water bowsers. But he would not be able to get onsite until ten thirty so would I be there if they arrived?

So there I was, I’d actually been picked up by Mike in Aspatria, he’d been lurking in Wigton until we went past, in the hope we may stop so he could take me down and save Karen some petrol as he had to pick Adam up anyway.

Luckily, I had to buy some paint from Top Bouchs (that’s Kevin, Billys shop is Bottom Bouches) so I went to get it and Karen went to get petrol, as she needed it anyway. As I’m in there Mike finds Karen and so she comes to tell me he’s waiting. So, off I go out to get in his white van, which I see outside the shop. As I’m struggling with the door a bloke who looks like the weird guy in “The Hills Have Eyes” is saying “Why are you trying to get in my van?”

Karen is rolling on the ground wetting herself and Kevin Bouch is highly amused.

I STILL have my dignity.

So there I am waiting see what the weather will do, I want to paint the GIANT FORK ‘N’ TROWEL today so it needs to be dry. It looks iffy, but there’s lots of other stuff to do. I need to start moving stone (last years wall, which has been lying in the dyke all year) as I’m expecting an Isofrieght container, for storing guitars, and keyboards and stuff. Toilet block and Shower for the acts, as stipulated on riders. It has to go where the stone is, so it has to be moved and my wallers are coming on Monday. Yes, the Drystone Stages wall this year is better built, by two professional Drystone wallers. Their work is important this year with the way the stage has changed. But more of than another day.

Simon and Tom arrived and delivered soft furnishings for the chill out area and Owens yurt
and spent a great deal of time discussing with Wilson the condition of the tyres on trailers!

There was one thing in evidence; there was buzz about the air! It was one of those fantastic pre Solfest days where everyone is crackling with anticipation and everyone works like mad to get the festival together…

…Simon and Tom had not been gone long when Alwyn and his Dad Leo arrived and it seemed like a matter of seconds before they were beavering away working on the roof cladding for the stage, it has evolved again not tarp now, but waterproof membrane. More comprises and new solutions. I might lose the windows in the pyramid that was a take deep breath moment. (Though I need not have worried, for not far away a saviour approached.) But the time does not allow for sentimentality, there is a deadline and an entire festival to build. There is no room for ego or prima donnas. That stage and pyramid must be finished by Sunday. There is also the Dance Tent, The Bar Stage, THE BAR, and the healing area, MAINSTAGE. An oh my giddy aunts worth of toilets to be installed (That’s what they do with new Bishops isn’t it?) All the while I’ve been recounting the tales of my days on the festival site that was once a field. Elsewhere others have been working on their respective areas, Sarah (I better point out here that most of the Solfest committee/steering group/organisation (what the hell are we?) are called Sarah, thus the name refers to a multitude of folk. I myself last year had a brief case of multi-personality disorder and called all nineteen of personalities Sarah…I kept stealing my own make up though.) Sarah, Tom and Jim are have been planning and preparing the Dance Tent and Chill Out Area. Dave* and Angela had been enjoying a brief holiday until Angela broke her leg, though they were always attending to matters Solfestical by means of the internet. (A LAPTOP swish bastard!) However, the Healing Area Angela has been working will be a place to nourish you soul. To experience The Solfest of Love in its truest and purest sense. They have been sorting out the traders this year too. Everything you will eat, everything you may wish to buy or experience. OK perhaps not strictly everything, but the authorities would take a dim view of Solfest giving a tender to ROOSTA’S SKUNKY MUFFINS, top grade ganjemilia freshly beeaked!

*Be sure to catch Dave with his friends on Mainstage and the Drystone.

They have their own “Things you do that you wouldn’t do if you didn’t have Solfest to do it for.” Moments, one of our band went to; as he thought, a meeting with our First Aid team chief for quite perfunctory matters logistics of the “when you arrive, you will be at, you shifts will be and you have a team off?” dotting “I’s” and crossing “T’s” kind of affair. To be startled by the entire squad of medics and a sizable percentage of the security staff and finding that he was expected to deliver a two hour training course on drug awareness.

Respect. The course was delivered, we do know our stuff. It is important, but it’s not that we swot up. Every one of us is good at something. Just like everybody that’s reading this (even the ones who aren’t. They just aren’t as intelligent as you guys are!) But we work to our skills.

So if the windows couldn’t go in, tough. The bottom line is the stage is the best possible I can provide for my acts, as I’ve said before. 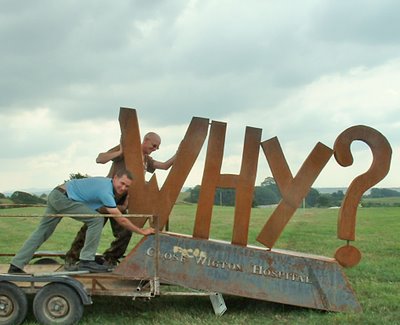 and began to help with the shifting of stone from dyke to trailer. (“How are the tyres?” “Fine”)

A something notable had occurred. He had arrived. The Big Guy, The Rock. J.T. BIG J.
We work to our skills, as I said and John knows wood. I may flatter myself the I have a way with words and can cobble together a song or poem and tell a tale. If hammer and saw, drill and plane fixings and nails where notes on a stave of Oak or Pine. John would play one hell of a tune with them.

Another evolution, and change and compromise. John knows his wood, and I will have my windows…
…And I will make them myself.

AWOOOOOGA!
AWOOOOOOOOOOOOGAAA!
HOLD THE FRONT PAGE THE GUYS FROM A-PLANT ARE HERE
HEAVY DUTY VEHICLES ONSITE
GET YOUR TOILETS HERE
GET EM WHILE THEIR FRESH

The activity both quickens and halts in an odd sort of way, as work on the stage has to stop while these big metal boxes containing all the things needed to make the site a functional place. So, as men and boys from six with child bright eyes to octogenarians and more with rheumy eyes under flat caps leaning heavily on sticks do the world over. We stopped to watch the trucks.
AND THEY HAD BIG CRANES ON THEM! 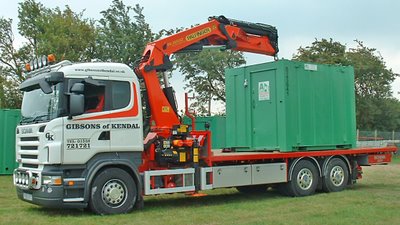 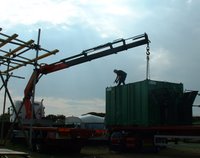 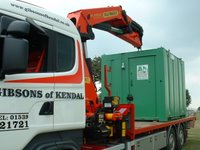 Leo and I went and had a cup of tea; it was all a bit exciting really.
I do enjoy talking to Leo, another family member who is part and parcel of Solfest and of course one of that elite group of SOLFEST GRANDFATHERS.

Keys for all these units had to be assembled into a MASTER RING and each one documented so we knew what it was and what its number was.

The day was so hot that when I tried to paint the trowel it dried on contact with the metal.

Then they were gone, apart from Adam who stayed on to take over while I went to the committee meeting. If anyone came to take me there.

There was by chance, and Sunny and I went to the meeting.
While at JAMEATER BASE I caught up with Guy who is painting The Bar Stage backdrop, briefly saw Caz who had been painting the decks desk for The Dance Tent. (She’d just found out she had two more to do!)

The meeting was straightforward and practical; we can’t hang around over anything at this point. But we still have on occasion to cast our votes, for good things and sometimes grim.

Afterwards Kirsten took me back the site along with some lights generously loaned by Cumbria College of Art.

Somewhere between JAMEATER BASE and the site the sluice gates of heaven had opened and the rain that fell was the sort that penetrated your clothes and continued through your skin before finally making you feel really really wet somewhere around your cartilage.
Stocking fragile electrical equipment away into a toilet block for safe storage in biblical weather does not rate highly on the fun things to do near Silloth chart. But it is one those things you do that you wouldn’t do if you didn’t have Solfest to do it for.

The day ended with Karen and me together. She had been seeking the opinions of the gentle folk at Frizington. The day had been so hot and she was tired. I was damp and she had brought me Chicken Salad.

Oh yes, food I forgotten all about that.