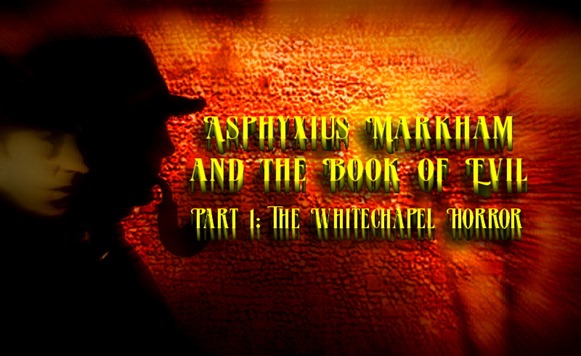 The streets of Old London Towne where shrouded in darkness, it happened to be night time not that you’d know the difference as it’s smog clad byways and alleys were always dark thanks to the factories and their steam engines ballyjackering day and night pumping clouds of steamsmoke and it’s felgid noxousities.

“Murder” came the cry in an unfeasibly broad Cockney accent “Someone fetch a Peeler, Jacks been and gorn an dunnit again!”

By chance not two streets away two men one tall and dark, enshrouded by it seemed more than his fare share of smog and the other whose atmosphere appeared positively clear compared to his companion who, hearing the call made speed to where the voice emanated from. Arriving just moments before two breathless policemen. One tall and gaunt with a moustache so wide that it almost needed to be hung from earrings to stay erect, the other fat and red with a moustache less wide but voluminous in capacity and it was alternating between free hanging and horizontal due to the exhausted pufferation of its owner PC Wilf Bruntle.

“Dear God!” Said Dr Jonathon Whiley-Minogue the less mysterious of the two. “Look at that haircut!”

“Yes my friend” Replied his friend “It seems Jack The Barber has struck again, what a terrible way to die.” He turned to to the fat Police Officer who was still breathing heavily making his copious moustache appear now like the branches of a storm assaulted tree. “You must get word to The Yard immediately…

…actually scratch that.” He turned away and faced the taller man.

“Capital! Now Grummock, You must get word to The Yard immediately,  Inspector Leslie Stride will want to know of this. Tell him the message is from Asphyxius Markham”

“Right away Sir, honoured Mr Markham Sir” Then turned heel and ran away so fast that his tall thin frame in silhouette looked like a flickering swastika.

“How many now Markham?” Said Dr Minogue, a man used to seeing horrors most foul yet now fearing in his very soul at the atrocities wrought upon this mans hair.

“This will be the fourth, Minogue. All of them slain by an ill favoured tonsure and all within a mile of this spot.”

“You would have thought that someone would have seen something by now, you can’t cut a mans hair in the street without someone noticing.”

“Indeed no, even I am still at odds to understand how he can get his victims into a barbers chair, comfortable and secure, do the deed and then disappear chair and all into the night.”

“But look here Markham, this spot upon his neck.” Dr Minogue indicated a small raised area on the mans neck.

“Why yes Minogue, you are on form tonight, it’s the mark of a dart I’ll wager.”

“You would be in funds if such a bet were made, it is indeed, this was how he was rendered immobile, for he has been poisoned by a dart dipped in a curate!”

At that moment Dr Minogue felt an unfamiliar elation, was this because he actually knew something that Markham did not. Had he, by the chance of fate laying low this poor soul by means most foul and doomed to enter the afterlife with a miserably sad hairstyle given him Dr John Whiley-Minogue one up on the great Asphyxius Markham…

…He could have kissed the corpse.”

“Yes Markham, I once read of a poison, the tale of it brought back by a missionary in the South Seas, of the Indiamen on some Islands there and how they paralyse their prey with darts from a blow gun, darts with which they have dipped in a curate…

…I don’t know how, the story did not say, but somehow the blood of a lower clergyman becomes a deadly poison on these darts.”

“Curare, Dr Minogue the poison is called Curare. I’ll vouchsafe you read this before you got your spectacles didn’t you”

“Yes, Markham.” said Minogue his feeling of well being and joy now deflating almost audibly. “But how on earth did you know that?”

“Later my friend”. Said Markham knowing he had hurt his friends feelings and must make amends “Let us not quibble about the letters, you are exactly right in all other respects. The case my turn upon your discovery. The poison is the key I’m sure.”

Minogue still had an expression of concern his face and turned to Markham saying.

“I wonder,  would this poison work if it were a Deacon or a Vicar?”

Markham blinked again and rubbed his hand over his face, sighing deeply.

“What about a Bishop Markham? What then?”

Markham held up his hand.

“Later Minogue, later. For he had just noticed something on a nearby wall and he was about investigate further when the loud chuggajemmywafering of a steam hansom brought the awkward moment as it croffitithered to a halt closely followed by a clockatockering made by the feet in the boots on the cobbles at speed of PC Grummock who skittered to a stop and achieved a near instant erection of poise by standing to attention at the hansoms side and saluting it’s occupant. Detective Inspector Leslie Stride of Scotland Yard.

“Alright Markham, What have you got for me, you may be an interfering curious and maddening amateur, but  sometimes you hit the mark the spot on and many a black hearted cove has swung for it, while I have risen in my career thanks to your efforts as you have neither claimed the credit nor put it about about my own ineptitude and bumbling manner. So I have a grudging respect for you, you interfering bastard.”

“Thank you Stride, I now have a smugness about me that you will never experience, ever.”

“I know I won’t, but my pay goes up with every case and I’m going to Tenerife in September. Anyway PC Grummock tells me it’s Jack again.” he looked down and the body, sniffed and gazed around him as Markham explained”

“This ones different, we’ve found he was immobilized by curare. I would advise your coroner to search for the distinctive puncture mark on the previous victims.”

“Very well, though it seems you’ve not seen the writing on the wall Markham” said Stride giggling at his own joke and thinking “Ah so this is what smug feels like!”

“The writing that says “The Joolers shall not be blamed.”

“I’m sorry Stride, but I fancy we can learn little more here. I must ponder those words and Minogue we must now take a tour of the foulest dens of iniquity this city has to offer. The tap rooms and opium dens of olde London Town shall be our lodgings this night.”

“So.” said Minogue “We seek information from the inhabitants of the underworld.”

Part 2: From Charing Cross to Undercroft can be found here. http://www.wizardmarra.com/asphyxius-markham-book-evil-part-2-charing-cross-undercroft/

One thought on “Asphyxius Markham and The Book of Evil. Part 1: The Whitechapel Horror”