at Isley Walton in Derbyshire and

THE DOCK OF THE BAY

at Glasson Dock near Lancaster, the former so called because it’s slap bang next the the Donnington Park racecourse and these days can be considered one of the elder statesmen among festivals as it has been going twice yearly for twenty three years and has established itself very nicely as one of the good ones serving up a decent helping of good music washed down with perhaps one of the best real ale bars you can find anywhere. Sixty, yes SIXTY different beers, ciders and perrys. I can be very happy at a place like that. 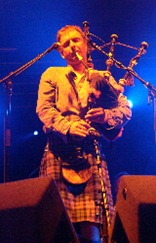 I’d been invited there by Andy “Boz” Borys one of the two organisers and asked to do one story which is a fair swap for a ticket for Karen and myself. The story was to fill in time in between John Otways set and that of Martin Carthy and Dave Swarbrick which to me was billing to die for. But the thing which made the weekend for me (and it was a weekend of some soaring musical highs from the swirling celtic pipes of THE PEATBOG FAERIES who gave us plenty of their familiar favourite tunes as well as a sizeable helping from the the new album DUST which I can only describe as brilliant classic Peatbogs but with a new edge,  to the stomping banging wonderfully exuberant drumming of

THE DHOL FOUNDATION.)was a set held in Helen Pinks tiny open mic marquee on traders alley. Karen and I had set off there as I’d promised Helen (a great friend and lovely person) that I’d do a bit of taletelling and when we arrived a band was well settled into a impromptu gig which lasted in all about two hours and it was the best two hours of the weekend. The name of the group is MISHAPED PEARLS and here is where I have to possibly use up my entire supply of superlatives for this year. Saying that how do I categorize this excellent band? Quasi folk/classical? I don’t really know, be be sure of this Mishaped Pearls make music of substance.

Ged Floods compositions are exactly that, to call him a songwriter would be to demean him slightly he is most assuredly a composer and when you add the haunting vocals of Manuela Schuette to this you find yourself listening to something very special indeed. Most of the songs are sung in languages other than English not that it matters one jot, for me listening to a song in a foreign language only helps as you hear the voice as an instrument in the fullest sense and what a beautiful instrument it is too. During the set I was transported to a delightful place where I could have happily sat for many hours and there were one or two surprises in there too, as at one point Manuelas voice was complemented by the esoteric sound of a Theremin which was even more of a surprise to find that it was actually an ap on an iPhone held up to a mic. 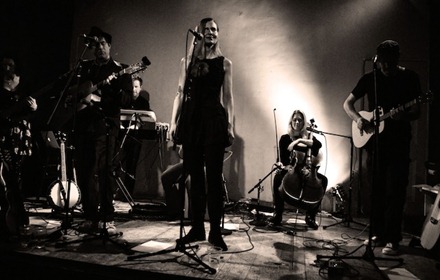 They will certainly be featured on my next podcast though in the meantime I wholeheartedly advise you to get the free download of HD video and track of theirs from their website, just click on the highlighted name above to go there.

THE DOCK OF THE BAY

Glasson Dock has been the home of a brilliant little festival for a few short years until it’s end a couple of years ago and has been the site of some of my most enjoyable storytelling sessions and indeed some of my more outlandish sessions.

Particularly memorable was my rendition of Homers Odyssey performed in its entirety on a toilet.

Sadly the worst rain for four decades had dampened the site somewhat and most parts of the festival had been relocated from the intended field. I no way did this spoil a great little event.

One thing you can be sure of at Glasson though is the quality of two things; the music and the fish and chips at the Lantern O’er The Lune cafe on the dock itself. It had come under new ownership since we last visited and I was worried that the best fish and chips to be had anywhere would become like the newspaper that once wrapped a nations chips and consigned to yesterday. But my fears were unfounded as it’s still the best.

Now let’s get down to the music, just about all of which was from Lancaster and environs. For such a small event the program was absolutely packed with acts most of which I didn’t get to see being pleasantly ensconced in “PIZZA SLUT” (incidentally I’ve just done a quick Google to see if there were any pictures or website/Facebook etc. for them and OMG! Let’s just say I didn’t expect what is out there.)

http://www.youtube.com/watch?v=MBEqmRLFCxc
So young and so talented

This funky seven piece are all members of Lancasters Youth Jazz Orchestra and they are tight as Captain Tight of the good ship HMS Tight and the horn section are even tighter than that. I was so impressed by them that they became my first official booking for the JACK IN THE GREEN STAGE at NUTS IN MAY…

…But you’ll have wait for my next blog to find out all about Cumbria’s newest festival.

One thought on “A CRACKING COUPLE OF FESTIVALS”